(INDIANAPOLIS)—-Kasey Kahne’s first win in three years, in the Brickyard 400 wreckfest has been a blow to sometime Missourian Clint Bowyer’s playoff changes and puts more pressure in Joplin’s Jamie McMurray.

Kahne survived a a race that saw a record number of cautions and three red flag stoppages that consumed more than two and a half hours, producing a race that ended after sundown, the longest Brickyard 400 by far.  The event consumed more than six hours, leaving Kahne so exhausted that he was taken to the infield care center suffering from dehydration.

Jamie McMurray, who started third, finished fifteenth out of the sixteen cars on the same lap as the winner.  He had run in the top ten most of the day until a late-race wreck damaged his car. 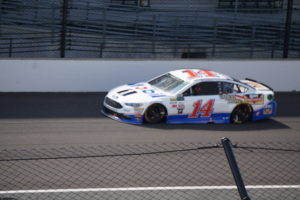 Bowyer had a day that saw his car(left) move from mid-pack at the start into the top ten until a crash on the front straightaway left his car wadded up (below) and accorded twentieth place. It took frack workers almost half an hour to clean up the mess before the race could be resumed. 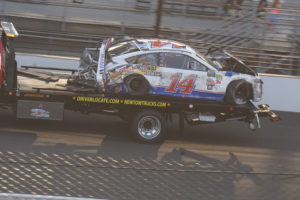 Kahne has become the twelfth driver to qualify for the sixteen-driver playoff for the championship.  That leaves four slots to non-winning drivers who have the most points.  Kyle Busch is thirteenth and McMurray is 14th but only eleven points ahead of Chase Elliott.  Matta kenseth is sixteenth.

Bowyer now finds himself seventeenth in the standings, thirty-three points out of the final playoff position with six races left to determine the championship contenders.

(INDYCAR)===IndyCar runs its first tests of its new aero package for its 2018 cars Tuesday.  After two days at the Indianapolis Speedway, the test cars will be tested on the high-banked short oval at Iowa and on two road courses.

(FORMULA 1)—F1 was off this weekend