(NASCAR)—Denny Hamlin’s win at New Hampshire gives him the eleventh guaranteed slot in NASCAR’s playoffs with seven races left before the sixteen-driver field is set.  Joplin’s Jamie McMurray, still looking for his first win of the year, is fourteenth in the playoff standings.  Clint Bowyer drops to fifteenth.  Both need a win to lock in a playoff spot. 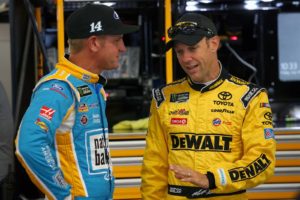 Former NASCAR champions Kyle Busch and Matt Kenseth (R), joined by Chase Elliot McMurray, and Bowyer (L) are contending for the last playoff positions. The Chase field is made up of race winners joined by non-winners based on their points totals.  Kenseth was fourth at New Hampshire. Bowyer was seventh. McMurray, who started fourth, ran among the leaders most of the day but brushed the wall late in the race and dropped to 17th, his fourth-worst finish of the year.

Hamlin snapped a 28-race winless streak and gave Joe Gibbs Racing its first victory of the year.  Kyle Larson was second for the seventh race of 2017.

NASCAR heads to Indianapolis for the Brickyard 400 next weekend. Kyle Busch won the race last year. He has not won a Cup race since.

(INDYCAR)—Josef Newgarden picked up his second win of the year, pulling away from Alexander Rossi in the closing laps of the race through the streets of Toronto. 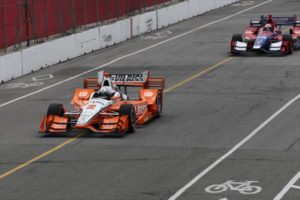 It’s his fifth career IndyCar win, his second since joining Team Penske this year.  Rossi (trailing Newgarden) racked up his best finish since winning the Indianapolis 500 last year.  He was 1.87 seconds behind at the end. James Hinchcliffe picked up the other podium position.

Helio Castroneves, last week’s winner, came home eighth, cutting the points lead of Scott Dixon to only three.  Dixon was tenth.  Castroneves has never won an IndyCar title in his twenty years in open-wheel racing.  He has been the runner-up five times.

Castroneves has five races left this year to overhaul Dixon and hang on for the title.  Talk in IndyCar circles has been that this could be his last year fulltime with Penske and that he might join Juan Pablo Montoya in Penske’s new sports car effort next year with a one-off deal for the Indianapolis 500, which he wants to win for the fourth time.

IndyCar’s next race is at Mid-Ohio on the 30th.

IndyCar will be running the first tests of its 2018 aero package on July 25-26 at the Indianapolis Motor Speedway.  Drivers Oriol Servia and Juan Pablo Montoya will drive Honda and Chevrolet-powered cars during the tests.  IndyCar is going to a common aerodynamic package fitted over the Dallara IR-12 chassis beginning next year.  Honda and Chevrolet-powered teams use the same chassis but have had slightly different aerodynamic packages for the past six years. Later tests will be done on the short oval at Iowa Speedway, on the permanent road course at Mid-Ohio, and the simulates street course at Sebring, Florida.  The aero kit will come in two forms—a high-speed version for ovals, and another design for road courses.

At some point the tests are likely to include some kind of windscreen designed to better protect drivers’ heads.  Ferrari tested one briefly before the British Formula 1 race this weekend.  IndyCar’s prototype aero screen is different.  Drivers say they favor the added protection although they worry about possible distortion of their vision.   The issue of cockpit protection has come to the fore since the death of Justin Wilson at Pocono two years ago when he was struck in the head by debris from another car that crashed in front of him.

(FORMULA 1)—Lewis Hamilton has tied grand prix greats Jim Clark and Alain Prost for the most wins in the British Grand Prix.  In the process, Hamilton has cut his deficit in the point standings to just one.  Ferrari’s Sebastien Vettel developed a flat tire while running third with two laps left at the Silverstone course, and finished seventh.

Formula 1 drivers run in two weeks at the Grand Prix of Hungary, the final race before the series begins a four-week summer holiday.  It’s one of Hamilton’s favorite tracks. He has won five times, a record for that track.

(FORMULA E)—We add a new category of racing this week.  Formula E, a division of the FIA, the sanctioning body of Formula 1.  Sam Bird has won the New York “Eprix,” the first time an FIA-sanctioned race has been held in any of the five boroughs of New York City.  He beat Felix Rosenqvist by 11.3 seconds.  The race was run on a 1.95 mile, ten turn course through the streets of Brooklyn. 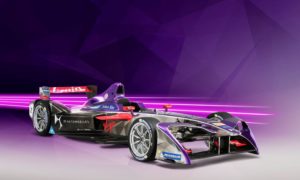 Formula E cars are completely electric-powered.  As you can see, they look like F1 racers but they have no reciprocating engines.  The series began in 2012 and has attracted several recognizable names: Mahindra (best known perhaps for farm equipment), Jaguar, Renault, and BMW, and a team ownership by Andretti Motorsport.

Formula E cars go 0-62 in three seconds and top out on the road courses they run at about 140 mph. Each driver has two cars and switches to a second fully-charged car about halfway through the race.

Is it the future of auto racing?  Not immediately.  But Formula 1 cars are now using hybrid power systems.

The Formula E twelve-race season wraps up with a double-header at Montreal in two weeks.

Previous Post: « Lynn holds off Pirates as Cardinals pick up their ninth shutout of the season
Next Post: Missouri first lady: Missile defense should not be U.S.’s first line of defense with North Korea »