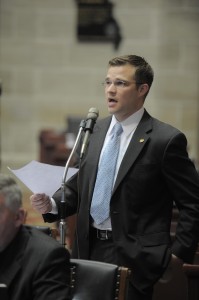 Curtman will be finishing up his eight year run in the term limited Missouri House when the 2018 general election takes place.  He says he’s going to be traveling across the state in an “exploratory effort” to find out if he has the resources and support to throw his hat into the mix for the Republican primary.

So far, only two GOP candidates have entered the race.  One is Kansas City resident Austin Petersen, who lost the Libertarian Party nomination for president in 2016.  The other is Tony Monetti, Assistant Dean of Aviation at the University of Central Missouri in Warrensburg.

The Republican race opened up when U.S. Representative Ann Wagner dropped out of the running in the first week of July.  She announced she would be defending her suburban St. Louis seat, which Columbia College political scientist Terry Smith calls the most competitive congressional district in the state.

State Treasurer Eric Schmitt has also been mentioned as a possible candidate.  Like Hawley, he was elected to statewide office last November.  Schmitt told Missourinet he’s “very focused on the job of being state treasurer right now”, but didn’t rule out a run.

Curtman says he’s working within Federal Ethics Commission rules in the exploratory phase of his campaign.  Federal law requires individuals to file as candidates when their campaign activity exceeds $5,000 in either donations or spending.  Curtman claims he’s been urged to run at the federal level for the entire time he’s been in the state legislature.

“I kind of landed on the radar of a lot of conservatives in Missouri when I challenged Claire McCaskill about eight years ago this month” said Curtman.  “Ever since then, conservatives have helped me, rallied around me, help get me into an office that a lot of people said conservatives couldn’t win.”

Curtman announced his exploratory committee Thursday morning in a statement in which he described standing up against Obamacare at a town hall hosted by McCaskill in 2009.  He claims he would have continued to challenge McCaskill about policy choices, but says she hasn’t been accessible to the public until her recent string of town halls.

“Had she been having town hall meetings for the last six or seven, eight years the way she has this summer, I’m sure I would’ve taken advantage of an opportunity to talk to her about policy that‘s affecting our state.  She just hasn’t made herself available and accessible to us.”

McCaskill spokesperson John LaBombard disputes Curtman’s claim.  In a statement he said “Claire has regularly held in-person town halls, open to the public, throughout her tenure—more than the rest of the Missouri Congressional delegation combined”.  McCaskill’s Washington office provided Missourinet with a list of town hall appearances between 2014-2016.

McCaskill is considered vulnerable by polling experts in next year’s vote.  This week, Inside Elections with Nathan Gonzales rated her re-election race a Toss-up.

While McCaskill calls herself a moderate, Curtman describes himself as a fiscal conservative candidate.  He thinks the country’s $20 trillion debt is a danger that must be addressed, and says the problem is out of control federal spending.

“The financial future of our nation rests in our federal government’s ability to exercise some fiscal restraint and discipline.  And it has got to start happening.”

According to his facebook page, Curtman is a financial adviser at the Carillon Group in St. Louis.  He’s 38-years-old, having moved to Missouri at age 10 from his birth state of Michigan.  Curtman graduated from Pacific High School in 1999 and majored in political science at the University of Missouri.