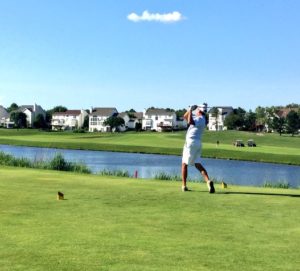 Men competed in the second round of the 2017 Missouri Stroke Play Championship Tuesday at the Winghaven Country Club. Although the men faced another day of high temperatures, the overall scores were much lower in the second round. The average score for the morning wave was 77.8 and the afternoon wave was 78.53.

Following Franklin, there is a four-way tie at 143 for the second place ranking. The tie is among Alex Cusumano (St. Louis), Chris Kovach (St. Louis), Chance Holden (Dexter) and Kyle Szyhowski (St. Charles). Szyhowski was tied for the first place ranking after the first round with a 70 (2 under par).
Both Cusumano and Kovach shot a 71 today and finished with a combined total of five birdies, nine pars and four bogeys. Holden completed the day with a 72 and had four birdies, 10 pars and four bogeys, and Szyhowski carded a 73 with one birdie, 15 pars and 2 bogeys.

Tuesday’s cut was 155; low 50 and ties. Skip Berkmeyer, the defending champion, is among those players moving on to the next round. Wednesday will consist of both an AM and PM 18-hole stroke play. The AM round’s tee time is set for 7:30.