Missouri’s Agriculture Director wants to quickly make available to farmers an herbicide that her agency temporarily banned last Friday.  Director Chris Chinn says sale and use of Dicamba was blocked after 140 complaints about damage from possible drift of the herbicide. 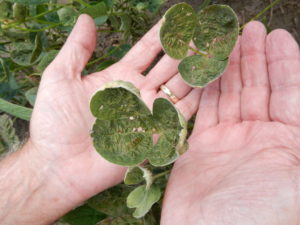 Dicamba is applied to soybeans and cotton that are genetically engineered to tolerate the herbicide, which has been effective in killing weeds that have developed resistance to other herbicides.

Its drift can severely damage crops, notably soybeans that have not been engineered to withstand it.  Most of the affected acreage is in the southern part of the state, but some is in the northern part of Missouri.  A lawsuit was filed last year by a peach farm which claimed most of its trees were destroyed by drift of the product.

There’s concern among farmers who have been using dicamba that the ban will allow weeds, specifically Palmer amaranth, to rapidly overtake their crops.  There are also some herbicide industry trade groups that contend the ban is premature because damage claims have not been thoroughly investigated.

Director Chinn says she wants “state use labels” for dicamba in place this week so that a temporary ban on the herbicide ban can be lifted.

Chinn said the Agriculture Department received calls from dicamba users who were worried about its drift to adjacent properties.

“We had commercial applicators who were calling with concerns that they had done everything by the label, and they couldn’t guarantee that they didn’t cause damage to neighboring fields.  They were very concerned, as were farmers and ranchers who said they had done everything according to the label as well.  They were really concerned that they might have caused damage to their neighbors.”

There are three predominant manufacturers of the dicamba herbicide – Monsanto, BASF and Dupont.  Those companies lave largely not displayed resistance to Missouri’s temporary ban.

Chinn says the manufacturers are showing a willingness to work with the Agriculture Department to develop the state use labels.

“We are going to be working very closely with them and the University of Missouri to make sure that that label is something that farmers can live with, that they can work with and still have a very effective tool in their hand to fight weed pressure.”

BASF says it’s writing a Special Local Need Label for the use of that company’s dicamba product.  The company claims it’s already proposed the text of a special label, in compliance with direction from the Agriculture Department.

Meanwhile, scientists at the University of Missouri are studying the effects of temperature inversions on the unintended drift of dicamba.  Weed science specialist Kevin Bradley says the information they’ve gathered from weather stations in Missouri shows that warmer air above is a contributing factor.

“It just shows us that it is possible for these new products to escape out of the air as a gas” said Bradley.  We have proven that already.  To what extent that is causing the problem is something we need to learn throughout the rest of the summer”

Bradley says the university’s research shows that dicamba drift is more likely to occur in the later hours of the day and into the night.

“To be safe, we ought to be spraying between 9 a.m. and 3 p.m. because our data says in that afternoon time-frame, an inversion can set in.  The labels don’t require it, but I think that’s a safe thing…that could help.”

Bradley contends the research shows that off target drifting of dicamba is possible through volatility or temperature inversions.

Agriculture is one of the top 5 industries in Missouri, contributing $88.4 billion to the economy and supplying more than 378,000 jobs.