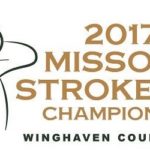 Monday marked the start of the 2017 Missouri Stroke Play Championship at the Winghaven Country Club. The Missouri Golf Association hosted the 20th Annual event with 156 players competing for the championship title. Between the heat and the wind, players struggled with their tee shots and areas around the green. There were many high scores from round one, showing how tough Winghaven is playing at 6,878 yards.

Currently tied for the lead is Kyle Szyhowski, from St. Charles, and Gene Hart, from St. Louis, both shooting a 70 (2 under par). The players tallied a total of 12 pars, four birdies and two bogeys on the day.

Right behind today’s leaders are Chance Holden, from Dexter, and Jeremy Franklin from St. Louis. The men are tied for the third place ranking after each carding a 71 (1 under par).

Pairings will remain the same for Tuesday and the cut is low 50 and ties.

Previous Post: « Women from KC and Columbia lead after day one of the 87th amateur golf championships
Next Post: Reid gets his guy for the Chiefs GM job »