You are here: Home / Sports / Voit’s big day powers the Cardinals to series split with Marlins 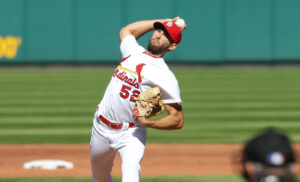 Voit homered into Big Mac land in the second and then added a two run double in the third.

Michael Wacha earned the win improving to 6-3 giving up two runs on six hits in 5 2/3 innings. He struck out nine and walked two.

Cardinals closer Seung Hwan Oh allowed a leadoff single in the ninth, but locked down his 17th save in 20 chances.