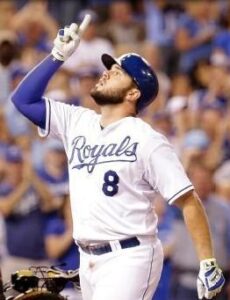 Major League Baseball announced today that Royals catcher Salvador Perez and left-handed pitcher Jason Vargas have been selected to the American League All-Star team. Perez was named the AL’s starting catcher for the fourth-straight season, while Vargas earns his first selection to the Midsummer Classic. Additionally, third baseman Mike Moustakas has been named one of five AL players up for the Esurance MLB All-Star Game Final Vote.

Vargas, 34, is the first Royals starting pitcher to be named to the All-Star team since Zack Greinke in 2009. He’s 12-3 with a 2.22 ERA, leading the American League in both victories and ERA, while checking in at eighth in WHIP (1.12), through Saturday’s games. He’s won seven-straight starts dating back to May 27, which is the longest streak by a Royals pitcher since Greinke won nine starts in a row in 2008-09. His 12 wins before the break are also the most since David Cone also won 12 in the first half of the 1994 season.

Moustakas, 28, won the Esurance MLB All-Star Game Final Vote in 2015 and is looking to participate in his second All-Star Game. He entered Sunday tied for fourth in the American League with 22 home runs, which match his career-high for an entire season (2015). He also matched the club record for most home runs before the All-Star break, tying Jermaine Dye, who did it in 2000. Moose is also batting .270 with 14 doubles and 49 RBI this season.

Fans can vote for Moustakas online at royals.com/vote and MLB.com as well as via mobile ballot and by SMS text voting. Text “A5” to 89269 (USA) or 101010 (Canada) to vote for Moose. Voting by text message is limited to 35 per phone number. In addition, during the last six hours of voting (9 a.m. CT to end of the Final Vote) on Thursday, July 6, tweets with #VoteMoose will also count.

The Final Vote opened at 7 p.m. CT this evening and runs through Thursday, July 6 at 3 p.m. CT. The Royals have partnered with the Los Angeles Dodgers for the Final Vote as fans are encouraged to vote for LA third baseman Justin Turner for the National League Final Vote, when they vote for Moustakas.