(NASCAR)—-Ricky Stenhouse survived the wild summer race at Daytona to pick up his second win of the year, both coming at restrictor-plate races. Stenhouse grabbed the lead during a two-lap overtime made necessary  by two crashes in the last ten laps.

Sometime-Missourian Clint Bowyer was unable to run down Stenhouse in the last few yards of the race, recording his second straight runnerup finish. “The bridesmaid thing sucks but second is better than third,” he opined afterward.  Bowyer has finished second three times this year and has a third among his seven top-ten finishes for his new team, Stewart-Haas Racing.

Joplin’s Jamie McMurray (in the #1 car in the middle of the action below) was able to contend in the top ten for much of the race despite early crash damage, but the crash with seven laps left damaged his car even more. 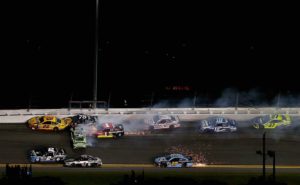 Nonetheless, he was still on the leader’s lap at the end and was credited with 14th.

Both McMurray and Bowyer remain in the running for the playoff races at the end of the season.

NASCAR races at Kentucky next weekend.

IndyCar and Formula 1 were off this weekend