A group of 26 lawmakers, state agency representatives and citizens gathered this week to study ways to improve the state’s deteriorating road system. 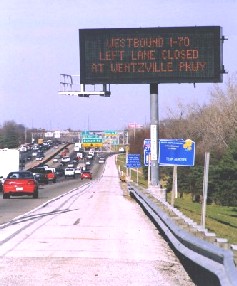 A measure which passed the legislature with near unanimous support created the 21st Century Transportation System Task Force, which gathered for the first of several meetings between now and the end of 2017 Wednesday.

The group is tasked with assessing the state’s transportation system along with its funding, and determining what level of monetary commitment is required to fulfill the needs of the state.  In addition, the group will look at various ways to finance roads.  It’s required to submit a report with recommendations to the legislature on January 1st, 2018.

The task force’s chairman, House Republican Kevin Corlew of Kansas City, also sponsored the bill in its run through the legislature.  He made sure that members of both parties would be part of the bipartisan effort.

But during the first meeting, glaring philosophical differences were on display from members of same party – two conservative Republicans.

Senator Dave Schatz of Sullivan strongly favors increasing the motor fuel tax to pay for road improvements, and is willing to sidestep voters to do so.

“At some point in time if we put something before the voters of the state of Missouri, and they have to make a choice whether they want to make the investment into infrastructure or not, I would hope that they would engage and do that” said Schatz.  “If they do not, it’s going to be inherent on the legislature to make a decision, because that’s what we were sent here to do, is to make decisions when things can’t get done.”

Shortly afterward, Senator Bill Eigel of Weldon Springs recoiled at the idea of raising any taxes to fund the state’s roads.  “I have a huge hesitation to solve our problems by simply going back to our constituents and asking for money anytime we perceive a shortfall.”

Eigel also questioned the wisdom of relying on gas taxes to finance roads.  Noting that average fuel efficiency has improved from 12-to-25 miles-per-gallon over the years, he suggested the funding source would have diminishing returns.

“Consumers today are looking for vehicles that are more fuel efficient” said Eigel.  “That indicates that with a population in Missouri that isn’t growing, the expectation is that, if anything, we may be selling less gallons of gas tomorrow than we are today.”

The idea of using tolls to supply money for roads also came up during the task force meeting.  Resistance to such a plan has been so strong in the legislature that wording was inserted into the Transportation Department’s budget prohibiting the use of state funds for any toll related purpose, including studies.

“Whether you’re conservative, whether you’re liberal, you would agree that that is a fundamental role of government” said Leone.  “Privatizing roads and bridges is a bad idea.  It’s not like funding a football stadium or an art gallery.”

State Department of Transportation Director Patrick McKenna was the informational speaker at the task force meeting.  He confirmed that the largest source of funding for roads and highways is supplied by user fees.

Two thirds of the department’s $2.5 billion in revenues was provided by fuel taxes, registration fees and vehicle sales taxes in 2016.  An additional $900 million came through federal matching funds.  Only $18 million in general revenue funds were used to support the Transportation Department.

The department director also brought up a figure he’s used numerous times over the past year to emphasize the financial needs for transportation in the state.  McKenna said an additional $825 million annually would be required to maintain roads, provide safety and economic development features and improve interstate highways.

Task force chairman Corlew challenged committee members to think “outside the box” when considering methods to fund Missouri roads and bridges.  “Henry Ford said that ‘When you do what you’ve always done, you get what you’ve always gotten’.  We can’t box ourselves into just thinking historically what we have done.”