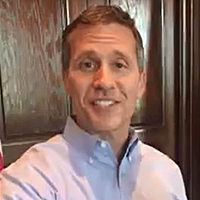 Greitens has vetoed a bill that he says asks the Commissioner of Administration to drain $35.4 million from various state funds into General Revenue to be used as a one-time “gimmick” to pay for other state programs. The measure aims to avoid cuts to in-home and nursing home care for about 8,000 elderly or disabled Missourians.

Greitens says the bill was pushed through in the middle of the night with no public hearing. According to the governor, it exempted funds for tattoo artists (Tattoo Fund), interior designers (Interior Designer Council Fund), embalmers (Board of Embalmers and Funeral Directors’ Fund), acupuncturists (Acupuncturist Fund), massage therapists (Massage Therapy Fund), and realtors (Real Estate Commission Fund) from the sweep.

“This bill would put funds for abused children, injured workers, and first responders in jeopardy, but protect funding for tattoo artists, interior designers, and realtors. Politicians cherry-picked their desired funds to protect, while the most vulnerable Missourians were left holding the bag,” says Greitens. “I put money in the budget to protect the most vulnerable Missourians. The House did their job. The Senate failed. This was a clearly unconstitutional, last-minute budget gimmick. I won’t sign an unconstitutional, one-time, fake fix to a real problem.”

In an unexpected move plagued by a session full of dysfunction, Senate Republicans and Democrats came together in compromise fashion to pass HCB3. Sen. Ryan Silvey, R-Kansas City, helped to iron out the deal. He takes a jab at Greitens.

The Guv loves to say he’s an “outsider.” Today, he made 8,000 seniors & disabled unwilling outsiders as well. #moleg https://t.co/jj2MgFFx9O

Silvey, along with Senate Republicans Bob Dixon of Springfield and Rob Schaaf of St. Joseph, have led the GOP charge in their pursuit of blasting Greitens this session. They’ve questioned things like Greitens’ refusal to release campaign donation information and his political action committee’s use of digital ads to target the Senators for things they consider to be disingenuous.

Where was @EricGreitens when #moleg worked on this? Likely galavanting around the rest of the country. #0leadership https://t.co/renevidpsG

The Great Seal of Missouri proved he’s career politician #1 by throwing seniors under the bus while helping his dark $ donor Centene! #moleg

The Governor will let a controversial minimum wage bill go into law automatically on August 28th without his signature. The measure prevents Missouri cities from setting minimum wages above the state’s wage level. That means St. Louis’s $10 per hour minimum wage ordinance is slated to go back to $7.70 per hour on August 28.

“The St. Louis politicians who did this claim it will help people. It’ll hurt them. This increase in the minimum wage might read pretty on paper, but it doesn’t work in practice. Government imposes an arbitrary wage, and small businesses either have to cut people’s hours or let them go. They tried this in Seattle. The minimum wage went up, and the results are heartbreaking: the average worker in the city lost $125 a month. That’s $1,500 a year because jobs were lost and hours were cut. Liberals say these laws help people. They don’t. They hurt them,” says Greitens.

The governor goes on to say that “politicians in the legislature dragged their feet for months” to find a solution on the issue.

“Now, because of their failures, we have different wages across the state. It’s created uncertainty for small businesses. And it all could have been avoided if the politicians had done their job on time,” says Greitens. “I disapprove of the way politicians handled this. That’s why I won’t be signing my name to their bill.”

The Governor has also signed SB 139, a bill that helps low-income Missourians pay for their prescription drugs. The entire MORx program was scheduled to expire in August 2017. Greitens’ action will extend the MORx program until at least 2022 for more than 182,000 Missourians. His action, however, means about 60,000 Missourians will no longer meet the income guidelines to qualify for such assistance.

Greitens has signed a controversial tort measure into law. He says a workplace discrimination bill, known as SB 43, brings standards for lawsuits in Missouri in line with 38 other states and the federal government.

The measure would require employees to prove that race, religion, sex or another protected status was the motivating factor for discrimination or for being fired. Punitive damages would largely be eliminated from being awarded, with limits mostly being held to actual damages. The measure would also stop workers from suing their colleagues.

“Tort reform is important. We need to prevent trial lawyers from killing good jobs,” says Greitens. “I’ve met with passionate advocates on both sides of SB 43. I respect all of them. I’ve listened to every side. I believe we need to bring Missouri’s standards in line with 38 other states and the federal government.”

Greitens says due to lower than expected tax receipts from 2016 and rising healthcare costs, he is freezing more than $250 million in the 2018 fiscal year budget. Some of the highlights of the governor’s budget withholds include a 9% reduction in core funding to Missouri’s colleges and universities, $15 million for K-12 busing expenses, and $1.9 million for youth residential treatment facilities.