The Missouri House Budget Committee chairman says withholds are likely, early in the next budget year. 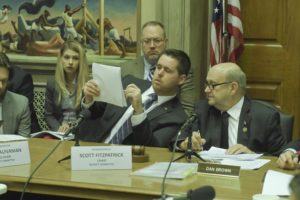 Missouri has a $27 billion state operating budget, and the fiscal year 2018 budget begins on Saturday July 1.

“If you look at state revenues right now adjusted for pending refunds, comparing refunds from this year to last year, we’re a little over two percent, I think, right now growth over last year,” Fitzpatrick says.

Fitzpatrick says they need to be at about 3.5 percent.

Chairman Fitzpatrick says higher-than-expected growth in fiscal year 2018 will be needed, for Missouri’s budget to remain balanced without restrictions. He tells Missourinet the state could begin the fiscal year with an approximately $130 to $140 million shortfall.

“The only way to deal with that, you can either grow out of that by having better than expected revenue growth next year, or you can basically restrict out of that or withhold out of that,” says Fitzpatrick.

Fitzpatrick notes the Legislature left about $100 million unbudgeted for revenue shortfalls or unplanned expenses. That money could be tapped to help make up the shortfall.

Fitzpatrick says that if HCB 3 becomes law, another $35 million in restrictions will be needed. Fitzpatrick predicts FY 2018 will be a “challenging” year.

“This is a tough one because, particularly because we cut out most of the low-hanging fruit,” Fitzpatrick says. “You know, the stuff that was easy to cut out and then a lot of the stuff that was hard to cut out got cut this year. And going into next year, if we have to repeat that exercise of cutting again, it’s really going to be a lot more painful next time I think.”

Governor Eric Greitens (R) told Missouri lawmakers in mid-January that almost $2 billion has been promised to “special interests” in tax credits, since 2010.

And while Governor Greitens’ proposed budget submitted to lawmakers on February 2 cited “poor economic growth”, Greitens also wrote that “revenue is being drained by special interest tax credits and the faster-than-projected growth in health care expenditures, driven in part by the national impact of Obamacare.”

Missouri lawmakers were able to approve the $27 billion operating budget by the May deadline.