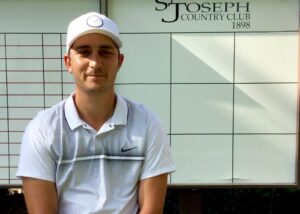 Golfers competed in the quarterfinal and semifinal rounds of Match Play at the 110th Annual Missouri Amateur Championship today at the St. Joseph Country Club. Four matches took place with players all fighting for a spot in the afternoon semifinal matches.

The first match had the defending champion Sam Migdal facing the St. Charles native and University of Missouri St. Louis golfer, Kyle Szyhowski. Migdal got off to a quick start and remained up until the 13th hole where Szyhowski made birdie to make the match all square. Both players parred the next hole. Migdal went on to make par on hole 15 and 16 to go dormie before taking the quarterfinal match 2&1 after both players parred hole 17.

The next match featured Shawn Cook and Alex Ciaramitaro. Similar to the previous match, Cook took the lead from the start until Ciaramitaro had an impressive eagle on hole 11 to put the match at all square. Both players parred hole 12 just before Ciaramitaro advanced, going 1 up on Cook. After taking his first lead of the day, Ciaramitaro wasn’t ready to give it up. He finished the match 1 up, advancing him to the semifinal round.

The final match of the morning featured Brevin Giebler and Ryan Eckelkamp. The match remained all square through the first three holes until Eckelkamp went 1 up after a birdy on hole 4. Giebler took his first lead on hole 8 and kept it through the match, beating Eckelkamp 3&1.

The afternoon semifinals began when Alex Ciaramitaro took Sam Migdal. Ciaramitaro took a quick lead and the match went back and forth through the first eight holes, however, Migdal was quick to take the lead in his favor when he went 1 up through 9 holes. He stayed up and took the semifinal match 4&2.

The final match of the day was between Brad Nurski and Brevin Giebler. In a tightly contested match throughout, Giebler took the lead on the 5th hole to go 1 up on the match. It went back to all square on the 8th before Nurski took back the lead in the 15th to go 1 up over Giebler. He remained one up to win the match and advance to the championship round.

The championship match Sunday between Brad Nurski and Sam Migdal starts at 9 A.M. at the St. Joseph Country Club.