((NASCAR)—The man who isn’t there WAS there at Sonoma this weekend.  Carl Edwards showed up for some sponsor commitments but gave no encouragement to those who think he’ll be back in 2018.

He told ESPN, “I haven’t talked to anyone and I haven’t even considered coming back.  Not right now.  It’s pretty clear if I feel like I really want to do something, then I would do it. But like I said in January, I would talk to Coach first and I haven’t had any conversations about that.” 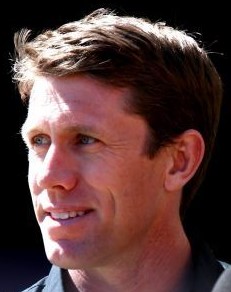 He has been in touch with “Coach” Joe Gibbs, his team owner for the last two years. Edward told reporters at Sonoma he sent Gibbs a letter saying he’s “probably happier and more content” than he was three months ago when he last visited a tack.  “You know how change is. You make a change, and there always is good and bad and there’s uneasiness.  But man, I’m enjoying life and it’s good.”

Edwards’ name keeps coming up in speculation as NASCAR’s “Silly Season” intensifies with Dale Earnhardt Junior’s announced plans to retire from his ride with Hendrick Motorsports, questions about whether Hendrick will give Kasey Kahne a new contract after continued mediocre performances, whether Danica Patrick will be retained at Stewart-Haas after even worse performances, whether Matt Kenseth will get a new deal with Gibbs, whether Paul Menard will take dad’s sponsorship money from Richard Childress to some other team—and more.

His visit to Sonoma was the first time he’s been to a NASCAR track in three months.  He says he hasn’t watched much racing; he doesn’t spend much time in front of a TV set.  He’s been working on his farm near Columbia, been to Hawaii where he went surfing, and caught the sailing bug on a trip the Virgin Islands. “Sailing is pretty cool,” he said. “It’s neat to get the chance to do some of this stuff.”  A boat is on his shopping list.

“I’m super appreciative to get the opportunity to do the things I’m doing now and enjoy life.”

(NASCAR)—Ganassi Racing dominates the front row for tomorrow’s race on the road course in Sonoma California. 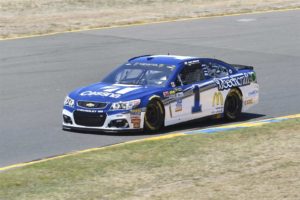 Joplin’s Jamie McMurray missed winning the pole by only 71/100ths of a second and will start alongside teammate Kyle Larson.  McMurray has started on the front row five times in his fourteen races at Sonoma, three times on the pole.  But he has only two top-ten finishes.