A city clerk in southeast Missouri faces felony charges after an examination of records revealed she stole $100,000. 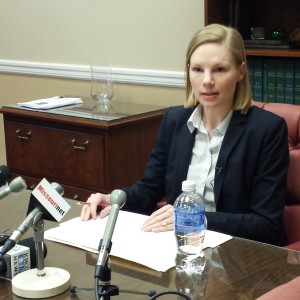 Dana Mayberry served as the Viburnum City Clerk for 14 years. The city identified inconsistencies in accounts she oversaw after she lost her reelection bid in April 2016.  At that time, most of the city and municipal division records disappeared in the tiny Iron County town of less than 1,000 residents.

Mayberry admitted in May to stealing city funds, after which the mayor notified the State Auditor’s Office.  An audit began in August 2016 after the Viburnum Board of Aldermen authorized one.

The examination began to uncover an elaborate scheme in which the former clerk adjusted customer utility accounts and then destroyed records and other evidence.  Auditor Nicole Galloway says Mayberry had a system in place to shortchange the city and the public.

“The city would say ‘Hey you owe us $100 for your utility payment’” said Galloway.  “The customer would go in and pay $100.  And the city clerk would adjust the resident’s account to show that only $50 was owed within the system.  She would give the city $50 and then pocket $50 herself.”

Investigators from the state Highway Patrol questioned Mayberry in December 2016, and she admitted to theft of $25,000 in utility, property tax, and municipal division receipts.  She confessed that she concealed her actions by adjusting customer accounts rather than recording receipts in the system.

The audit shows an estimated $104,000 in adjustments to 1,800 water and sewer accounts over a 7-year period.  Auditor Galloway says Mayberry revealed no shame in her actions.  “That is pretty bold.  It was a purposeful stealing of those funds, and then purposely destroying the evidence to cover it up.”

In addition to manipulating customer bills, Mayberry adjusted her own personal utility account to avoid paying for water and sewer services to her home for four years at a cost of about $4,000.  The auditor’s office pieced together the former city clerk’s activity through interviews with citizens, the city staff and the mayor.

It’s thought Mayberry may have also stolen several thousand dollars in court fines and property tax payments.  The total extent of her theft is not known because of the number of records that were destroyed.

The auditor’s office praised the city of Viburnum for requesting an examination, but was critical of the lack of oversight which allowed the clerk to swindle the city and its citizens for years without being caught.  The auditor’s report stressed the need to improve accounting procedures and oversight of the utility and property tax system.

Galloway thinks the level of theft shown by the former city clerk should be an eye opening experience for the city.  “Look, when one person can control so much of the city’s money or public funds, there needs to be oversight to either prevent bad things from happening, or detect them quickly if they do.”

The auditor’s report gave the city of Viburnum a performance rating of poor.  Galloway says the substandard showing means her office will return to determine whether recommendations have been followed in the next six months.

Mayberry has posted a $25,000 bond and pleaded not guilty to receiving

New legislation awaiting Governor Greitens’ signature would allow local prosecutors to request help from the State Auditor in forensic investigations where fraud and theft is suspected by officials.  Galloway says she worked with the state Association of Prosecuting Attorneys and Republican Senator Bob Dixon of Springfield in crafting the measure.