(IndyCar)—Former Missouri Tiger football player Jay Frye is looking forward to seeing how some 2018 cars look on the road.  And on the oval. 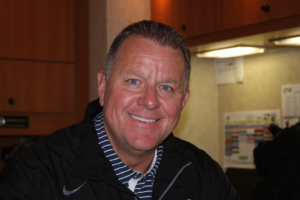 Frye is the President of Competition and Operation for the IndyCar series.  He was a a tight end and offensive tackle for the Tigers 1983-86 while getting his marketing degree from the University of Missouri.  He moved to IndyCar from NASCAR in 2013 as Chief Revenue Officer for Hulman Motorsports and moved into his current job two years ago.

IndyCar is going to a new body pattern, called an aero kit, for next year’s series.  There’s one design for high-speed Speedway racing. That design will be tested on the Indianapolis oval July 25-26. 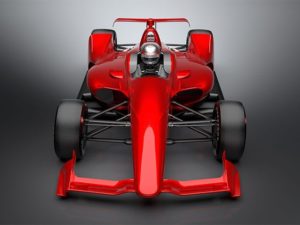 And another design that relies on bigger wings for downforce on road courses and smaller ovals.  It will be tested August 1 at the Mid-Ohio Sports Car Course with two other tests: August 28th at the Iowa Speedway and September 26 at Sebring.  Both kits will be made for the Dallara chassis that IndyCar uses. 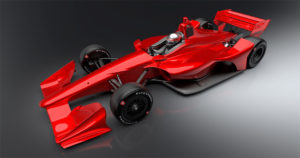 We talked to Frye about the new car and possible driver cockpit-safety improvements when we visited his office at the Indianapolis Motor Speedway last month.

Driver cockpit safety assumed greater emphasis after driver Justin Wilson was killed during a race at Pocono in 2015 when he was hit in the helmet by some debris from a crash ahead of him. Designs for cockpit safety features will be done in the next round of tests but Frye doubts the features will be incorporated into the new design before next year’s races.

Frye says more details about the testing will be announced later.  Autosport.com reports two-time Indianapolis 500 winner Juan Pablo Montoya will test the Chevrolet-powered version of the car.  Oriol Servia, an 18-year veteran of IndyCar and Champ Car, who drives for Rahal/Letterman/Lanigan racing, will test the Honda-powered version.  Unlike present designs, the 2018 aerokits will not be of different designs.