Buses, taxis, Uber and Lyft will be busy transporting people in Jefferson City and many communities throughout Missouri for the total solar eclipse on August 21st. The capital city is working on its transportation plan for the days surrounding the historic event. A resolution sponsored by Councilwoman Erin Wiseman has passed making parking free that day in Jefferson City. 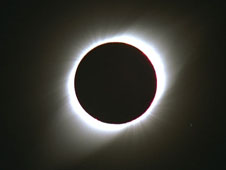 This is the first total solar eclipse to cross the entire nation in 99 years. Jefferson City and the Show-Me State are prime spots to see the moon block the sun and turn the sky pitch black for about two minutes that afternoon.

More than 50,000 additional people are expected in Jefferson City that day. Many Missouri hotel rooms, bed and breakfasts and camp sites are sold out.

Katherine Reed with the Jefferson City Convention and Visitors Bureau tells Missourinet all hands are on deck for the days leading up to the event.

“I think we’ll have our police department, who’s great with working with us on events, our EMT services and capitol police. I think everybody is going to be out in full force that day helping everyone navigate and making sure everyone is safe during this event,” says Reed.

Additional parking across the Missouri River and shuttles are planned.

NASA has chosen Jefferson City as one of seven cities it will be broadcasting live from on the day of the eclipse. It is also bringing a traveling exhibit to provide a NASA interactive experience.

“I think when you mention NASA, people either don’t believe you or they think it’s really cool and they decide to make Jefferson City their destination,” says Reed.

The capital city is planning three days of events starting on August 19.

Spectators are being encouraged to buy certified safety glasses to protect their eyes from prolonged viewing of the sun.