The state treasurer has launched an effort to return unclaimed property to Missourians. 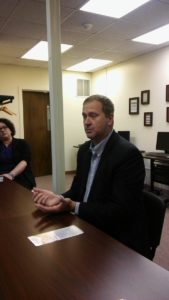 “I mean almost $1 billion of money that we’re the custodians of, and we want to make sure we’re doing everything we can to financially empower people by getting their money back to them so they can use it how they see fit,” Schmitt says.

Schmitt’s office is publishing the names of 145,000 unclaimed property owners in more than 100 newspapers across Missouri this week.

The average unclaimed property return is about $300.

“We had a family actually in St. Charles reach out to us recently, they got $3,000 in unclaimed property and it really changed their lives,” says Schmitt. “They were able to pay some bills, get back on their feet.”

Schmitt encourages you to check showmemoney.com to see if you have unclaimed property.

Schmitt, who was elected in November, says one in ten Missourians have unclaimed property. He says his office is trying to find people “where they’re at.”

Missouri law requires the notices to be published in newspapers annually, in order to list names of people whose unclaimed property valued at $50 or more has been turned over to the State Treasurer’s office during the past year.

Schmitt has returned more than $13 million to about 50,000 account holders, since taking office in January.

Schmitt, who is Missouri’s 46th State Treasurer, served two terms in the Missouri Senate. The Glendale Republican served in the Senate from 2009-2016.