(NASCAR)—Joplin’s Jamie McMurray has had a good seat this year watching the development of one of NASCAR’s future (some one way present) superstars.  McMurray finished fifth this weekend at Michigan as teammate Kyle Larson picked up his second victory of the year.  Johnson and Larson have both had top-ten runs in seven of this year’s 15 NASCAR Cup races. 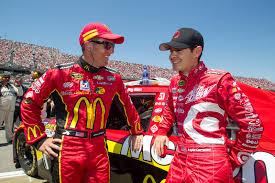 McMurray (left) is having one of his better years and is riding seventh in the point standings.  Larson is leading.  The two have been teammates for all four of Larson’s full-time years with Chip Ganassi Racing.  McMurray has made the ten-race season-ending Chase for the NASCAR title the last two seasons.  Larson made the Chase for the first time last year.

Larson held off another of NASCAR’s rising stars, Chase Elliott, along with Joey Logano, Denny Hamlin, and McMurray at Michigan. Sometime Missourian Clint Bowyer was 26th after a late-race pit stop to change a tire punctured in a brush with the wall.  He had run in the top dozen all day until then.

Larson, McMurray and the rest of the NASCAR teams head to the road course at Sonoma, California next weekend.

(INDYCAR)—IndyCar has announced the dates of the first tests of the 2018 car.  We’ll have more later in the week, including an interview with Jay Frye, the former Missouri Tiger football player who is now the President of Competition and Operation for the series.

Scott Dixon hopes to expand his 13-points lead at Road America at Elkhart Lake, Wisconsin next weekend.  Defending series champion Simon Pagenaud gained two spots in the standings at the Texas Speedway race and is one point ahead of Indianapolis 500 winner Takuma Sato in third. 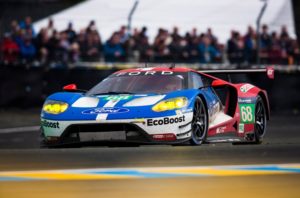 IndyCar veteran Tony Kanaan spent part of this weekend driving in the LeMans 24-Hours in France, calling the chance to drive in the world’s most famous endurance race “a dream come true.”  He became the emergency substitute for Sebastien Bourdais in one of the Ganassi-prepared Ford GTs after Bourdais was badly injured in an Indianapolis qualifying crash.  Kanaan had driven the Ford before, in the Daytona 24-Hours when he and his two co-drivers finished fifth.

It was a disappointing result at LeMans, however, for the Ford camp, which won the GTE Pro category last year.  The GTs finished 19, 23, and 24 in the overall standings, 6, 10, and 11 in class.  Kanaan’s car was the one finishing 23rd overall, 28 laps behind the winning Prosche 919 hybrid, but one position ahead of the GT co-driven by fellow IndyCar driver Dixon.

(FORMULA 1)—The first-ever Grand Prix of Azerbaijan is next on the F1 schedule—next Sunday in the capital city of Baku.  Drivers competed on the circuit last year, but the race was known as the Grand Prix of Europe then.  The 3.73-mile circuit includes twenty turns.

Previous Post: « Vargas has most wins in the majors. #Royals chip away in the Central
Next Post: Missouri town continues to honor the legacy of one its fallen heroes »