Dueling rallies on both sides of the abortion issue were present at the Missouri Capitol during the second special session called by Governor Greitens Wednesday.

The pro-life gathering in the mid-afternoon featured the governor himself, who electrified the crowd of roughly 200 people with his remarks.  Greitens had called for the rally to take place, just as he had the legislative session.

Police presence at the pro-life rally was heavy, and at least two people were escorted out of the building for disrupting the event.  One of them left a backpack behind, which was quickly inspected to reveal a collection of harmless books.

The pro-life rally drew a singularly focused crowd, many of them dressed in red t-shits emblazoned with phrases promoting the cause.  Among the speakers, in addition to Governor Greitens, was Right to Life Legislative Liaison Susan Klein.  A number of Republican lawmakers were also in attendance.

Samuel Lee of Campaign Life Missouri, like Klein, spent much of Tuesday and Wednesday testifying in committee hearings where the various abortion bills were being presented.  Lee was not surprised that both sides of the abortion issue were out in force.

A deacon in the Catholic Archdiocese in St. Louis as well as a lobbyist, Lee is quick to point out that  the success rate of pro-life legislation in Jefferson City is high.  “A strong majority, basically two-thirds or more of our Missouri General Assembly is pro-life, and that’s why we’ve had great success over the years passing good pro-life legislation.” 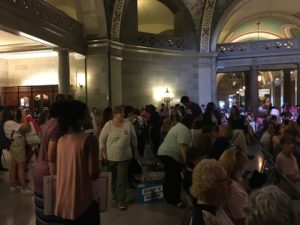 While the pro-life rally was staged in the relatively compact third floor rotunda area of the Capitol, the pro-choice gathering in the late morning took place in the spacious first floor portion of the rotunda.  The crowd was similar in size, if not slightly larger, with a hodge-podge of left leaning advocacy groups in attendance.

The organization Progress Missouri advertised the event as “a first-ever “People’s Special Session” in response to Governor Greitens’ call for an extreme, expensive, and unnecessary special session”.

That sentiment was echoed by Bonyen Lee-Gilmore with Planned Parenthood of Great Plains.  She said Greitens called the special session with personal gain in mind.

“This is a political theater staged in order to climb a political ladder that Governor Greitens is trying to climb in this city” said Lee-Gilmore.  “It is not doing anything for taxpayers across the state.”

Jeffrey Mittman with the American Civil Liberties Union spent much of Tuesday and Wednesday testifying in committee hearings.  His organization contends its one purpose is to defend constitutional rights.

Mittman contends the court decisions demonstrate that legislation to restrict abortion access is an infringement on women’s rights.

The current special session called by Greitens is largely a response to federal court decisions that have struck down the state’s abortion laws.