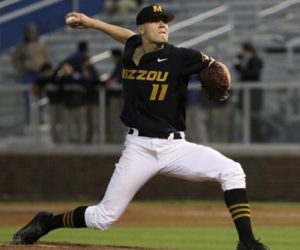 Tanner Houck had a brilliant three-year career with the Missouri Tigers as a starter.  Despite only pitching for three seasons, he ranks 7th overall in strikeouts.  He allowed career lows in hits (78), extra-base hits (22), homers (five), triples (one) and earned runs (35) this past season, but his stock dipped a bit.  That’s why the Boston Red Sox we able to select Houck with the 24th overall pick in Monday’s MLB Draft.

Red Sox V.P. of Scouting Mike Rikard thinks Tanner can turn into a starter one day, but with a live fast ball from a tricky arm slot and his lack of a true second pitch, Houck could be a short inning pitcher to begin.

Houck has hit 98 mph on the radar gun, but he usually throws from 92-96 mph. He is one of the hardest throwers in this year’s Draft.

“I need to work on tightening up the slider, really developing the changeup, really making sure it’s kind of a next-level swing-and-miss pitch for me,” Houck told MLB.com.

“He throws strikes. He doesn’t walk guys. He really competes on the mound,” said Rikard. “He just does a lot of the things we look for in a college pitcher.”