You are here: Home / Health / Medicine / Governor Greitens call for special session on abortion not clear on all intentions

Some of the issues set for discussion in Missouri’s upcoming special legislative session on abortion aren’t entirely defined. 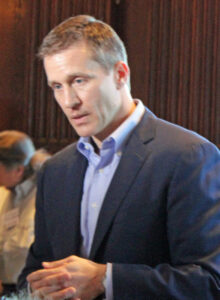 In calling for the gathering, its clear Governor Eric Greitens wants a St. Louis city ordinance repealed. His release also targets the need for annual inspection of abortion clinics to be made mandatory.

But it’s not certain what his proposal “for clinics to have a plan for complications” would entail.  It’s also not clear what would be required to “stop abortion clinics from interfering with emergency responders”.

Greitens simply suggested an abortion clinic would try to prevent itself from looking bad by asking an ambulance to be inconspicuous approaching the building.

A number of endorsements for a special session from pro-life organization were included in Greitens release.  One from the Susan B. Anthony List noted activists in St. Louis have observed women being taken away by ambulance at least 66 times since 2009.

A St. Louis Fire Department report does not say whether those 911 calls involve complications from abortions. More than half of the calls were for general concerns including allergic reactions, fainting, falls, seizures, psychiatric issues and illnesses.

The St. Louis Post Dispatch reported in 2015 that there were 23 emergency calls from the clinic (since 2009) for hemorrhages, or heavy bleeding, which is a potential complication of abortion. Hemorrhaging can also be triggered by other disorders treated by the clinic.

The newspaper also reported that if every case of hemorrhaging were linked to an abortion, the complication rate would total less than 0.1 percent of the more than 35,000 abortions performed at the clinic since 2009.

The special session called by Greitens may have been telegraphed through a release from Department of Health and Senior (DSS) Services Director Randall Williams.

In it, he claimed abortion providers had failed to report every complication after an abortion to the agency within 45 days, and said he’d taken steps to ensure compliance with the law, that dates to 1979.  He went on to say potential risks and complications should be discussed with patients prior to abortion procedures.

The Reproductive Health Services wing of St. Louis’ Planned Parenthood, the only current abortion provider in the state, told the Associated Press that it was unaware until recently that it had to report any complications from the procedures under a 38-year-old state law.  The center said it had never been asked by the state for such reports, but would comply with the law.

In his statement, DSS Director Williams offered no specific information about breaches or suspected violations of the law.  A spokesperson for Williams, Sara O’connor, declined Missourinet’s request for comment.

While issuing his call for the special session, Greitens noted a “court decision from earlier this year weakened our state’s health standards in abortion clinics”.

Greitens was referring to the action of a federal judge in Kansas City, who blocked a Missouri law which required abortion doctors to have admitting privileges at local hospitals and that clinics meet hospital standards for outpatient surgery.

The court ruling will open the door for several clinics in the state to reopen for abortion procedures.

With both Greitens and DSS Director Williams pressing the need to address complications from abortions, and with a focus on ambulance visits to the current abortion provider, it could be that the Republican majority of lawmakers will be looking at a new approach to limiting access to the procedure.