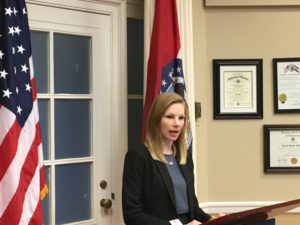 “They also report long wait times, calls that have been disconnected, the inability to speak to a representative or an actual person to try to get information on the status of their refund,” says Galloway.

By law, delayed tax refunds should include interest, but some Missourians have also complained about not receiving any.

Galloway says the department’s tax refund problems have led to a drastic increase in the number of calls made to the Whistleblower Hotline.

“That is a very high volume for one particular issue,” says Galloway. “That’s why it’s so concerning that we received 1,000 in a six week period, which is why we need to be proactive and inform the Department of Revenue so they can address these issues as soon as possible.”

Joel Walters assumed his role as Revenue department director on April 1. He was appointed by Republican Governor Eric Greitens.

Michelle Gleba with the Missouri Department of Revenue says it is working to process returns as quickly as possible.

“We anticipates all refund returns that do not require a manual review to be paid by June 30,” says Gleba.

There’s no information about how long it will take to receive refunds on returns that do require a manual review.

Galloway says she’s encouraged by the state Revenue Department’s public statements and its indication that it will process the remaining refunds by June 30.

“I do think that for most citizens, the June 30 deadline is not a relevant date to them because they just want their money back,” says Galloway.