The National Churchill Museum in Fulton will be awarding former Missouri Senator Jack Danforth (R) with the Winston Churchill Leadership Medal this week. 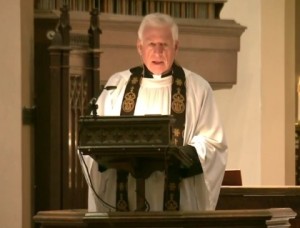 Senator Danforth will be honored Thursday evening at 5:30 at the Bellerive Country Club in the St. Louis suburb of Town and Country.

The Churchill Museum is located at Westminster College in mid-Missouri’s Fulton. Danforth notes Churchill delivered his famous “Iron Curtain” speech on the Westminster campus in 1946.

“I think that it’s worth revisiting Churchill’s speech and what he was talking about and how it’s meaningful today, so I am really very, very pleased about this award,” Danforth says.

Danforth notes Churchill did not call it the “Iron Curtain” speech.

“He (Churchill) called the speech ‘Sinews of Peace’, meaning binding the world together, the post-World War II world together, free nations together, in the face of the threat of the Soviet Union and the Iron Curtain,” says Danforth.

Then-President Harry Truman (D) joined Churchill at the 1946 event at Westminster College, which drew about 30,000 people to Fulton.

During that speech, Churchill told the audience “From Stettin in the Baltic to Trieste in the Adriatic, an iron curtain has descended across the Continent.”

During an interview with Missourinet, Danforth reflected on each of those presidents, and working with them.

Danforth notes President Carter arrived in Washington in January 1977, at the same time he did. Danforth describes Carter as a “very good person”, with good human qualities. He says President Carter was detail-oriented.

Danforth describes Reagan as a “great President”, with big ideas. Danforth also says Reagan “didn’t get into the weeds” like Carter.

Danforth says President Bush (41) “is one of the most decent human beings you could ever know”, adding that Bush was thoughtful.

The Churchill Leadership Medal is the Churchill Museum’s highest honor, awarded to people who have demonstrated “extraordinary leadership.”

Danforth was elected Missouri Attorney General in 1968. After retiring from the Senate, Danforth later served as U.S. Ambassador to the United Nations and was a Special Envoy for peace in Sudan.

Danforth says things in politics have changed since he retired.

“We the people are less tolerant of compromise now, and particularly the base of each party, we just insist on absolute (ideological) purity and no compromise and don’t give an inch,” Danforth says.

Danforth notes he and Senator Thomas Eagleton (D) were friends, adding that they both lived in Washington. Senator Eagleton died in 2007. Danforth says his wife and Eagleton’s wife are still friends.

Pulitzer Prize-winning author Doris Kearns Goodwin will deliver the keynote address Thursday evening at Bellerive, which is located on Ladue Road. The event begins at 5:30.

Click here to listen to the full 12-minute interview between Missourinet news director Brian Hauswirth and former Senator Jack Danforth, which was recorded on June 2, 2017: