Johnson joins short lists; Rahal sweeps Detroit (NASCAR)—Jimmie Johnson took  the lead away from Kyle Larson on an extra-lap restart on Dover’s “Monster Mile” and held on for his 83rd Cup victory, edging Larson and Martin Truex, Jr., while most of the remaining cars on the lead lap crashed behind  them after Ty Dillon’s car slid into the path of other cars.  One of those caught in the crash was Joplin’s Jamie McMurray, who had run in the top ten all day.  But when NASCAR threw the yellow flag, the positions were immediately frozen and McMurray was credited with 7th place, continuing his consistent season that has moved him to fifth in overall points. 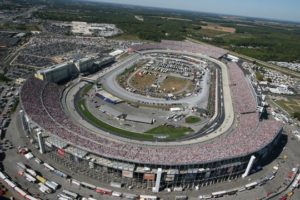 Larson had led 241 of the 406 laps run, six more than the scheduled number because a late crash brought out the caution and set up a green-white-checker two-lap shootout to conclude the race.

The win ties Johnson with Cale Yarborough for sixth on the all-time wins list. He also is now the third driver in NASCAR history to have at least eleven wins at one track.  Richard Petty did it at four tracks and Darrell Waltrip did it at two tracks.

NASCAR runs next weekend at Pocono.

(IndyCar)—Graham Rahal has become the first driver to win two races in the series this year—and he did it at the same track on back-to-back days. 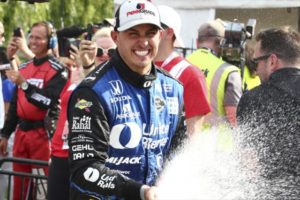 Rahal won the first of the double-header races on Saturday at the Belle Isle temporary road course in Detroit and followed it with a win on Sunday on the same course. The twin wins move him from fifteenth to sixth in the points standings.  Rahal took the lead in Sunday’s  race from Josef Newgarden on the fiftieth of the 60 laps and held on to a 1.177 second win although Newgarden ran the fastest lap of the race on lap 59.  Last weekend’s Indianapolis 500 winner, Takuma Sato, who started from the pole with a new track lap record, came home third.  Scott Dixon finished fifth behind Simon Pagenaud and continues to hold the points lead, eight ahead of Helio Castroneves and eleven better than Sato.

IndyCar takes to the track next Saturday night at Texas, where Rahal is the defending champion.

(Formula 1)—Formula 1 was off for the weekend but will celebrate the fiftieth Grand Prix of Canada next weekend in Montreal.

Previous Post: « The Bill Pollock Show–Yes I say the “F” word when it comes to Matheny…is it time for a managerial change for the #STLCards (PODCAST)
Next Post: Missourinet Noon News 6-5-2017 »