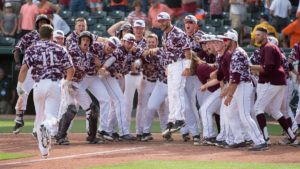 Jeremy Eierman’s two-out, two-run home run in the bottom of the ninth handed Missouri State a 6-5 walk-off victory over Oklahoma State in the opening round of the NCAA Fayetteville Regional Friday afternoon at Baum Stadium.

After the Cowboys (30-26) mounted a two-out rally of their own to grab a 5-4 lead in the top of the ninth, Justin Paulsen sparked the Bears’ comeback with a leadoff single in the home half of the inning. Trey Cobb recovered to retire Jake Burger on a fly ball to center and Blake Graham on a strikeout, before Eierman’s opposite-field blast capped MSU’s 18th come-from-behind victory of the season and set up a Saturday (June 3) evening matchup with the winner of Friday’s second game pitting host and top seed Arkansas against No. 4 seed Oral Roberts.