You are here: Home / News / Gov. Greitens’ flood recovery team says federal relief is on the way any day now

Governor Eric Greitens’ flood recovery team has announced its intentions as the state awaits federal assistance for historic flooding which occurred in late April and early May. 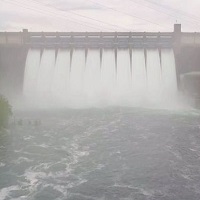 Also Patrick Baker, the former Chief of Staff for the lieutenant governor’s office who has moved over to the Department of Economic Development, will be in charge of making sure relief efforts are coordinated across state agencies.

During a conference call with reporters on Thursday, Erdmann said the cabinet was approaching the recovery operation as a long term effort.

“We fully understand that this is not just a near term (event), or something of weeks,” said Erdmann.  “For many families, this is going to be months or maybe even longer than that.  So we’re in for the long hall, understanding how challenging this will be for many of our citizens, given the unprecedented nature of some of the disaster.”

According to Juden, a record 1,400 families have received assistance from those centers.  He said moving forward, a goal of recovery operations would be to improve community resilience.

”We’re rebuilding infrastructure,” Juden said.  “If it was compromised by this event, we have the opportunity to increase the height of the bridge, or the resilience of that bridge, so that, should we have another event, we’re not replacing it again.”

An assessment shows $58 million in public infrastructure damage, well over the threshold to qualify for assistance through SEMA’s federal counterpart, FEMA.  An assessment of individual damage showed 1,217 homes in the state were either heavily damaged or destroyed for a total of $28 million.

Broxton said he was confident a federal disaster declaration would be coming in days.  When a reporter noted Oklahoma received a declaration a week prior (May 26) for damage from the same storms, Erdman said the sheer volume of damage in Missouri required lengthier assessments.

“Our disaster declaration touched upon 51 counties.  The scale of the devastation and the time and the order to complete the damage assessments, which is the standard FEMA process, took longer precisely because our state was more impacted.”

Once a declaration is made, disaster survivors will have 60 days to register for federal aid.  FEMA will publish a toll-free number where survivors can apply for assistance.  The federal agency is also holding “public applicant briefings” to address infrastructure needs such as the rebuilding of roads and bridges.

Residents suffering from the floods can seek assistance through non-profit groups by calling the 211 United Way Missouri helpline, which is answered 24 hours a day.

The Greitens recovery team also wants the public to be aware of con artists who are drawn to disaster ravaged areas in search of quick profits. Juden says scammers are always a major concern when there’s heavy property damage.

“We started sending that message out early on when the disaster happened, for everybody to be mindful and aware, and make sure that they were dealing with a reputable contractor before they entered into any contracts.”