(IndyCar)—The Indianapolis 500 has started its second century with a an international winner, but not the one some had thought most likely. 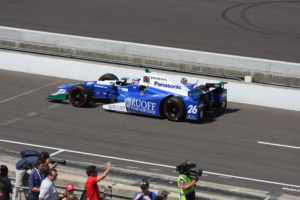 Takuma Sato grabbed the lead from three-time ‘500” winner Helio Castroneves  with five laps to go and then held off Castroneves to win by two-tenths of a second,  becoming the first Japanese driver to win the Memorial Day classic.  The race was the 101st Indianapolis 500, this one completed shortly before a downpour soaked  the area that already had been hit by heavy rains all week.

The early part of the race was dominated by 2014 winner Ryan Hunter-Rhea, double Formula One champion Fernando Alonso, 2016 champion Alexander Rossi, and 2013 “500” champion Tony Kanaan.  But Alonso’s  engine failed 21 laps from the finish.  Hunter-Rhea dropped out with mechanical trouble with 64 to go.  Kanaan finished fifth and Rossi seventh after being dropped to the second-ten in late-race pit stops.  Max Chilton, who led the most laps—fifty—was fourth.

But it was Sato, who lost the race in 2012 when his daring attempted pass for the lead of Dario Franchiti on the first turn of the last lap wound up with him going into the wall, who had the strength to fight off Castoneves’ bid to become the fourth four-time winner of the event, earning the right to join car owner Michael Andretti and his crew for the traditional “kissing of the bricks.” Sato wrapped Japan’s national “Rising Sun” flag around his shoulders during the ceremony. 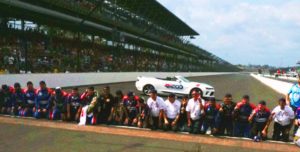 The strip of bricks at the start-finish line is all that remains of the four-million bricks that provided the racing surface for the first “500” in 1911.

The race was stopped for more than twenty minutes after a horrendous crash in which pole-sitter Scott Dixon’s car rode up over the back end of Jay Howard’s spinning car, and went so high

that Castroneves drove safely underneath him before it crashed down on the SAFER barrier upside down so hard that the engine was torn loose from the driver’s compartment.  Dixon’s car eventually landed right-side up.  He said afterwards that he had a bruised foot but was otherwise unhurt.

Castroneves finished second for the third time.  In those three races he has finished a combined .55 seconds behind the winners, including his .006-second loss to Ryan Hunter-Rhea in 2014.

Dillon’s car is owned by his grandfather, Richard Childress, who was Earnhardt’s longtime car owner.

Dillon  managed to stretch his fuel one more lap than Jimmie Johnson, who ran out of gas with one lap left.  Johnson finished seventeenth.  Dillon finished eight-tenths of a second ahead of a rapidly-closing Kyle Busch.  Martin Truex, Jr., who led 233 of the 400 laps before stopping for a splash of fuel, was third.

Dillon’s car ran out of gas at the finish line.  It had to be pushed into victory circle for the post-race celebration.  Joplin’s Jamie McMurray was twelfth, two spots ahead of Clint Bowyer.

(FORMULA 1)—Sebastian Vettel upped his points lead over defending champion Lewis Hamilton to 25 points by winning the Grand Prix of Monaco, the most prestigious race on the F1 circuit.  Hamilton started well back and could do no better than seventh.

The win was the first for Ferrari at Monaco since Michael Schumacher came home first in 2001.  Teammate Kimi Raikkonen was second. Red Bull’s Daniel Ricciardo got the other podium finish.

The fortunes of the McLaren team continued to be dismal.  Jenson Button, filling in for Fernando Alonso, who skilled the race to run at Indianapolis, started from last place after his car was assessed a fifteen-position qualifying penalty because parts were changed on the engine after qualifying.  Button was knocked out of the race in a crash. The other McLaren car also failed to score any points.   McLaren has yet to gain any constructor’s points this season.