Bullets aren’t flying at Governor Eric Greitens like they are on the frontlines as a Navy SEAL. Improvised explosive devices aren’t a workplace hazard these days for him. In the face of bitter battles, Greitens says members of the military find ways to stay positive. He is commanding a different type of battle nowadays. One that involves people throwing rocks and stones at him. 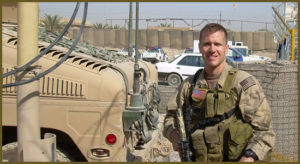 Greitens tells Missourinet people’s lives are at stake in Missouri, just like they are in a war zone. He points to the state’s opioid crisis that resulted in more than 1,000 deaths last year of mothers, fathers and children. He points to fighting for the more than 13,000 children in Missouri’s foster care system.

“We’re never going to get to perfect, but we can absolutely make things better and we know that we can save lives,” says Greitens.

The governor says that he uses some of the same Navy SEAL military tactics as he does in the governor’s office.

“At the end of the day, we bring the same kind of tactics, which is like let’s bring people together, let’s study the problem, let’s ask people to join us in a movement in service and let’s go out and make a difference,” says Greitens.

The governor has served four tours of duty overseas, including in Iraq and Afghanistan. He has been a commander of an Al-Qaeda targeting cell. Greitens has received a Purple Heart for his team’s efforts involving a 2007 suicide truck bomb in Iraq.

Just like as a Navy SEAL, Greitens says it takes a good team to get things done.

“We’ve got big fights, but a lot of times the fight isn’t quite as simple as it’s not right in front of you,” says Greitens. “I wish that all we had to do was go find one guy at 0:300 and capture them and that would solve the problem but it’s more complex.”

Some lawmakers in both parties have criticized his leadership style because of Senate debate this year about a measure involving pay raises for state elected officials. Greitens reportedly belittled a member and tried to persuade some lawmakers to vote against a pay increase. The Senate rejected the proposed raises.