When Sebastian Bourdais’ car went almost head-on into the second turn wall at the Indianapolis Motor Speedway during a qualifying run Saturday, some long-time observers quickly drew comparisons to Gordon Smiley’s 200-mph crash into the third-turn wall thirty-five years ago.  It was the crash that brought back the memories.  The drastically different result last weekend brought to mind a third crash—that one involving a Missourian. 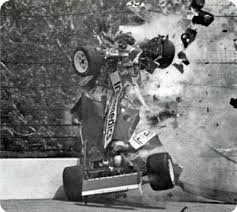 I was sitting in the bleachers that were inside the third turn that day in 1982 and had snapped a picture of Smiley as he went past, had looked down to manually advance the film when the engine noise suddenly stopped.  I turned to my left just as the crowd around me erupted and saw Smiley’s car disintegrating as it cartwheeled into the catch fence above the concrete wall.

The impact was so violent that there was no doubt in anyone’s mind at that instant that we had seen Gordon Smiley die.

Bourdais’ car last Saturday afternoon shed shattered pieces, became airborne upside down, and eventually slid to a stop right side up. Within seconds, the worst fears of onlookers were alleviated when Bourdais was seen moving in the cockpit.  He’s at a hospital a short distance from the track today with a broken hip and a broken pelvis. 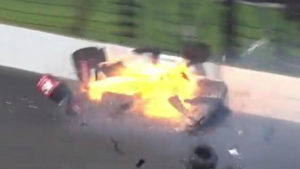 He had surgery Saturday night. “It’s going to take time, but I’m feeling pretty good since the surgery,” he said Sunday. If you watch the Indianapolis 500 next Sunday, look at the last row of the starting lineup.  You’ll see two-time “500” driver James Davison in a white car with the number 18, the substitute driver and the substitute car for Bourdais.  The car in the crash was far beyond repair and Dale Coyne racing has spent the hours since the crash converting Bourdais’ road-racing car to run on the oval.  Davison got his first laps in it yesterday.

Two of the factors that saved Bourdais’ life are the cars of today and the Speedway of today.  Data recorders show Bourdais was going 227 mph, almost thirty miles an hour faster than Smiley was going in 1982 when he lost control of his car much as Smiley did—the back end started to come around; the driver tried to correct for the slide, and the car rocketed straight toward the wall.   But the Bourdais car is the product of more than three decades of design changes intended to disperse the force of an impact and to protect the securely-belted driver in a much more protective tub as the car disintegrates. And the Bourdais impact appeared to be slightly less than full head-on, as was the case with Smiley.

The second factor involves steps taken by the Speedway to become a safer place to race, including a major change a decade-and-a-half ago for which the last Missouri driver to compete in the Indianapolis 500 became an unwilling guinea pig.

Robby McGehee (pronounced “McGee”), who lives in Frontenac, was practicing that May 5, 2002, hoping to qualify a few days later for his fourth “500.”   Instead the left rear tire of his car lost air as he was running about 220 mph through the third turn and his car slammed backwards into the wall, briefly catching fire and turning on its side before sliding to a stop. 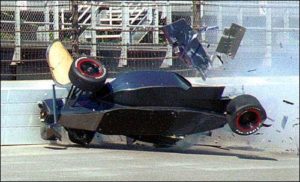 McGehee came out of the crash with a broken leg—actually re-broken because he was still healing from a previous crash at another track—and a small broken bone in his back.  But his injuries could have been far worse if not for something new at the Speedway that year.

The “something new” was the SAFER Barrier installed by the Speedway after the 2001 race. The track had turned to the University of Nebraska’s Midwest Roadside Safety Facility three years earlier.  Project Director Dean Sicking led the effort to develop a system reducing the impact drivers felt through the sudden giant G-forces when their cars hit the wall. The data shows that the Bourdais crash generated a top force of 100 g’s. 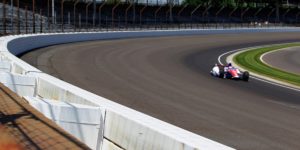 The researchers came up with a barrier made of structural steel tubes welded together then strapped to the track’s concrete walls.  Segments of polystyrene foam are mounted between the tubes and the wall. The design is intended to dissipate the energy of the crashing car.  Sicking recently said the initial goal was to cut the risk of serious injury in half.  Actually, he says, studies show the SAFER (Steel and Foam Energy Reduction) barrier has lowered that risk by seventy-five percent.

The barrier, coupled with the head and neck restraining devices adopted by NASCAR after Dale Earnhardt’s fatal crash in 2001 and the energy-dissipating design of IndyCar cars, has let more drivers survive and even walk away from crashes than before.

Robby McGehee was the Indianapolis 500 Rookie of the Year in 1999, when he finished fifth.  He’s one of the relatively few drivers who has led a lap in the Speedway’s 109-year history. Although he’d rather be remembered for his 1999 run, he knows his legacy will be that he was the first driver to crash into the SAFER barrier.

“It could have saved my life because that was a hard hit,” he told us.  “There’s nothing soft about that soft wall but that extra three or four feet of ‘give’ that it gave me when I hit it at 218 miles an hour probably kept me from getting knocked out.”   Or worse.   “Any time you’re not awake there’s a significant risk of brain injury,” he told the Speedway’s Kirby Arnold a few days ago.

McGehee missed the 2002 race because of his injuries.  Lack of sponsorship money made him a guy called on during the last days of qualifying to get cars into the races in 2003 and 2004.  But those were the only IndyCar series races he ran those years and he decided to get on with life. 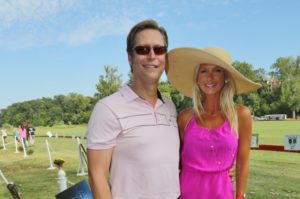 He’s 43 now, runs the family insurance business in St. Louis County, is married to Norma, has three children, and goes back to the Speedway in May to join with other former drivers to meet fans and sign autographs.

And the SAFER barrier that Robby McGehee proved could be a lifesaver?  It’s on the concrete walls of every IndyCar and every big-time NASCAR oval track in the country. In the fifteen years since he proved the SAFER barrier installed at Indianapolis lived up to its name, only one driver has lost his life there in a crash—Tony Renna whose car got airborne in 2003 and flew into the catch fence above the SAFER barrier, similar to the Dan Wheldon fatal crash at Las Vegas in 2011.   No NASCAR Cup driver has been killed in a Cup race since Earnhardt.

You can find another analysis of the Bourdais crash at: