The preliminaries this weekend are done. Memorial Day Sunday will be the day for the auto racing fan that starts early in the morning and roars well into the night with three of the biggest races in the three big-time racing series.

Formula 1 starts the day early (for those of us in the Western Hemisphere) with the Grand Prix of Monaco.  The Indianapolis 500 at mid-day and NASCAR’s longest race of the year that will end well after sundown around here will wrap up the day.

Let’s go by the clock.

(FORMULA 1)—If you’re a race fan, grab a cup of coffee and settle in at 7 a.m., Missouri time, for the Grand Prix of Monaco, the annual run in the world’s second smallest nation.  The narrow, winding, 2.09 mile, 19-turn track winds through the streets, through a tunnel, and along the harbor in a principality that is only .78 acre in size.  The race is considered the ultimate test of a racing driver’s skills.  Fernando Alonso has won it twice but he won’t be there because—

(INDYCAR)—Fernando Alonso will be trying to make the Indianapolis 500 the second part of his triple crown of racing (he also wants to win the LeMans 24-hours.  He will start in the middle of the second row.  Scott Dixon has taken his third pole for the 500, ripping off a four-lap average of 232.164 mph. He’s joined on the front row by two-time pole winner Ed Carpenter, and last year’s race winner, Alexander Rossi.   Takuma Sato and J. R. Hildebrand flank Alonso in row two.

James Davison will start 33rd, last, as a replacement for Sebastian Bourdais, hospitalized and recovering from injuries suffered during a qualification run Saturday.  Bourdais’ car was destroyed in the crash, but the crew from Dale Coyne racing has been working since then to transform a car usually run in road races into a car that will handle ovals.  Davison is to get his first laps in the car during testing Monday afternoon.

“Back Home Again in Indiana” will be at 11:12 our time.  “Drivers, Start Your Engines,” is two minutes later and the green flag is scheduled for 11:19.

(NASCAR)—The All-Star race has gone to Kyle Bush, who had never won a race at the Charlotte Motor Speedway. It’s not a points race but winning it was worth one-million dollars.  Kyle Larson finished second. Jimmie Johnson was third, brother Kurt Bush cross the line just ahead of Joplin’s Jamie McMurray (shown during driver introductions). 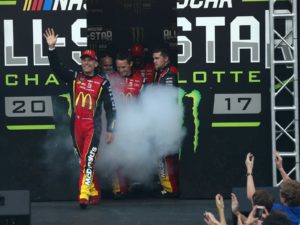 NASCAR’s longest race of the year—600 miles, 400 laps—begins at 5 o’clock, our time, at Charlotte.   The field will be set Thursday evening.  The first of the long races was run in 1960, an event in which the famous racing writer Chris Economaki dashed to Lenny Pages wrecked car and did the CPR that saved Page’s life.  Martin Truex won last year. Columbia’s Carl Edwards won the 600 in 2015.

McMurray is looking for his first win in the big race.  He won his first Cup race at Charlotte in the fall of 2002 but the closest he’s come to taking the BIG race was a runnerup in 2010.  He’s finished in the top ten in the 600-miler only four times, but he’s on a roll this year with eight top-tens in the first eleven races and he DID finish in the top five in the all-Star race.

Nobody is trying to “do the double” this year—run the Indianapolis 500 and the NASCAR 600-mile race later in the day at Charlotte.  Seven times, NASCAR drivers have tried it, the most recent being Kurt Busch who was the Indianapolis Rookie of the Year for his sixth-place finish in 2014, the first time he had ever raced an Indy car.  Robby Gordon tried it four times.  John Andretti did it once. But Tony Stewart is the only driver to go the full 1100 miles in one day, finishing sixth at Indianapolis in 2001, then coming home third at Charlotte that evening.