(NASCAR)—Aric Almirola’s hard crash at the Kansas Speedway last weekend will keep him out of his car eight to twelve weeks while the compression fracture of one of his back vertebra heals. 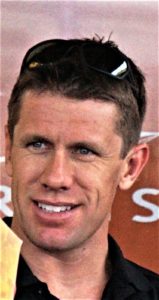 FOX sports’ Alan Cavanner reports Richard Petty Motorsports contacted Columbia’s Carl Edwards to fill the seat while Almirola heals, but Edwards declined saying, “I am not able to do it.”   RPM will have 2008 Cup Rookie of the Year Regan Smith in Almirola’s car for this weekend’s all-star race festivities at Charlotte Motor Speedway.

Edwards announced in January he would not drive this year but he has not said he is “retired.”  Although there was no elaboration about a reason he “was not able” to replace Almirola, it might be noted that Petty uses Fords while Edwards maintains close relations with Joe Gibbs Racing, which uses Toyotas and earlier this  year Edwards drove a Toyota SUV to a new speed record of 230 mph.

(INDYCAR)—IndyCar will set the 33-car field for next weekend’s 101st running of the Indianapolis 500 this weekend.  Only 33 drivers are entered, including 1996 winner Buddy Lazier, now 49 and the oldest driver who will compete.

Cars will qualify this weekend with additional turbocharger boost then return to regular levels for the race.  “Fast Friday” was the first day drivers were able to lap the Speedway with the additional power and speeds immediately jumped from the low to mid-220 mph range to 230 mph and above.  French driver Sebastian Bourdais top the list with a hot lap of 233.116, turning a lap on the 2.5-mile square, almost flat, oval in a tick more than thirty-eight seconds.

(The all-time qualifying records have been held by Arie Luyendyk, who turned one lap at 237.498 and completed his four-lap qualifying run at 236.986. He also holds the record the fastest unofficial lap—239.986 mph.   The fastest lap in the race, however, as driven by Eddie Cheever that same year—236.103.  There has not been a lap during the race since then that topped 230 mph)

Lazier turned his first practice laps, topping out at just under 220 mph.  Former Formula 1 champion Fernando Alonso was near the top of the speed charts with a fast lap of 231.827. Timers caught him going a career-best 236 mph at one point on the track Friday.  Twenty-two drivers had at least one lap faster than 230 mph.

The fastest nine drivers Saturday will have a run-off late Sunday afternoon to decide who will start from the pole for the 500.