A southeast Missouri state lawmaker is asking Governor Eric Greitens (R) to call a special session aimed at creating about 500 to 600 new jobs in the Bootheel. 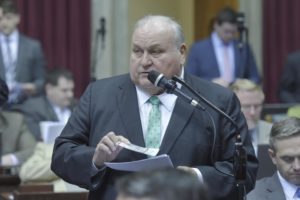 The Missouri House voted 148-2 last week to support State Rep. Don Rone’s (R-Portageville) amendment to give the Public Service Commission (PSC) the right to negotiate affordable power rates for an aluminum plant he hopes can reopen.

The bill died in the Senate. During an emotional Thursday floor speech, Rone told House colleagues he is proud to represent one of the poorest districts in the state.

Rone says his proposal would help restore about 400 jobs at the former Noranda site, and would help create 200 jobs at a new Bootheel steel mill.

Rone says his constituents need work, adding that “they’re looking for a way out of poverty.”

Missourinet asked Greitens spokesman Parker Briden Monday if Greitens has received a letter from Rone about this, and if any decision has been made about the issue. We also asked Briden if Gov. Greitens has made a decision yet about calling a special session on other issues.

“As we’ve said, all options are on the table. We’re discussing all of that now. Our top priority is jobs, and Rep. Rone is a great champion of jobs for the people.”

Democrats and Republicans in the Missouri House gave Rone a standing ovation after Thursday’s speech, in which he also blasted fellow Republicans Doug Libla (R-Poplar Bluff) and Gary Romine (R-Farmington). Rone says Libla and Romine opposed his efforts on the PSC bill.

Libla and Romine are state senators.