You are here: Home / Business / State Rep. Rehder will file PDMP bill again next year; “I’m a fighter, and I know that we will get this done” (AUDIO) 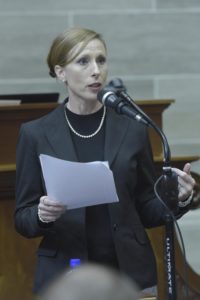 A PDMP is an electronic database that collects data on controlled substance prescriptions within a state.

Rehder worked all day Friday to try to come up with a compromise, but she couldn’t get enough votes by the 6 p.m. deadline. That is when the 2017 legislative session ended.

Rehder choked-up Friday afternoon at about 5, when she told Missourinet that her bill was dead. Rehder says she’s disappointed.

“There’s so many families that just really need this, and, I’m sorry … but, I’m not giving up. I’m a fighter, and I know that we will get this done,” Rehder says.

Rehder notes Missouri is the only state in the nation without a PDMP.

“We certainly got so much further than we have gotten in all of the years,” says Rehder. “And so I remain hopeful. I remain hopeful that we’re going to be able to do this for Missouri and Missouri families.”

Rehder says a statewide solution is needed, adding that people shouldn’t lose out on this because of their zip codes.

The Missouri House third read and passed the Rehder bill on April 3.

The next afternoon, State Sen. Rob Schaaf (R-St. Joseph) announced that he was ending his opposition to Rehder’s PDMP bill. He cited a “groundswell” of support for her bill.

Schaaf asked Rehder to include a requirement that the database be used. The Missouri Senate passed its PDMP version in mid-April, and included a prescriber mandate provision.

“And so to have the Missouri Medical Association against us, (St. Louis) County Executive (Steve) Stenger came out against us and so you know our support just started eroding,” Rehder says.

Rehder praises State Sen. Dave Schatz (R-Sullivan) for his PDMP work, describing him as a “good man, strong to his word.” Rehder credits Schatz with getting the bill as far as it got.

Click here to listen to Missourinet news director Brian Hauswirth’s full six-minute interview with State Rep. Holly Rehder (R-Sikeston). Brian interviewed Rep. Rehder at the Statehouse in Jefferson City at about 5 pm on May 12, 2017, with about an hour to go in the 2017 session: