(NASCAR)—Clint Bowyer, Carl Edwards, and Jamie McMurray grew up within a few hours’ drive of the Kansas Speedway and Bowyer and Edwards have considered it their “home track.” 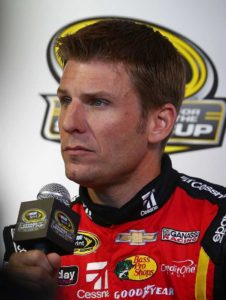 McMurray, from Joplin, says he grew up between Kansas and Dallas, and his real “home track” is the I-44 Speedway at Lebanon although he said before this weekend’s race, “I would love to win at Kansas Speedway, but I want to win there because it’s where we race this weekend, not necessarily because I grew up 200 miles south of here.  So I’m going to let Clint have that ‘hometown track thing” and I’m just going to be Jamie.”

Martin Truex Jr., made sure Saturday night that those three remain oh-for-their-careers at Kansas.  Truex got past pole-sitter Ryan Blaney on a late re-start and picked up his first victory at the track.  Brad Keselowski and Kevin Harvick got past Blaney in the closing laps.

The three drivers are a combined 0-57.  Edwards finished second and had thirteen top tens in nineteen races before deciding to watch his soybeans and his children grow this year.  Bowyer was second once and has six top tens in eighteen races there.  McMurray has finished seventh twice and Saturday night was his second eighth, his only top tens in twenty-one races. 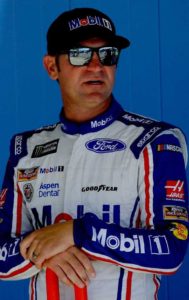 Bowyer, an Emporia, KS native who spends some time at the Lake of the Ozarks, and Edwards maintained a good-natured rivalry about winning at Kansas.  Bowyer said Edwards’ absence was “a little bit of a bummer.”  In a pre-race news conference, he told reporters, “I enjoyed Carl.  Carl did such a great job of promoting our sport and was a great brand ambassador for whoever was on the side of it. He’s missed.  We both were Midwestern boys, grew up chasing this dream kind of together.”

The race was stopped for almost half an hour by a violent three-car crash involving Joey Logano, Danica Patrick, and Aric Almirola.  Logano and Patrick walked away but Almirola was removed from his car on a back board after the top of the car was sawed open. He suffered a compression fracture of a vertebra in his back, was held overnight at the University of Kansas Medical Center, and was released Sunday morning and flew back to his Mooresville, NC home.  He’s described as “mobile.”  Richard Petty Motorsports will announce later this week if a substitute driver will be in his seat for the next race.

Next up is the annual All-Star race at Charlotte next Saturday night.  Sixteen drivers are eligible for the race (Edwards would have been the 17th if he were still active).  A run-off race involving other drivers will be held to determine three drivers who will transfer into the field racing for the million-dollar top prize in the all-star race.  Edwards won it in 2011.  McMurray won it in 2014. Bowyer has won two qualifying races but his best finish in the all-star race is seventh, three years ago.

The next points race will be the 600-miler on the night of May 29th.

Will Power dominated Saturday’s Grand Prix of Indianapolis on the road course, winning for the second time, and for a second time from the pole.  His thirtieth IndyCar win elevates him to eleventh on the list of winners in series history. Scott Dixon and Ryan Hunter-Reay finished behind Power.  While Power has two wins on the road course, he lacks a win in the big race that both Dixon and Hunter-Reay have.

Last year’s winner, Simon Pagenaud, was fourth. Helio Castroneves was fifth as Team Penske had drivers in three of the top five positions.  Pagenaud still leads the points standings, but his lead over Dixon is down to ten points.

Qualifications for the 101st Indianapolis 500 will be next weekend. The fastest nine drivers on Saturday will have a run-off for the pole Sunday afternoon.

(FORMULA 1)—Pit strategy has played a key role in Lewis Hamilton’s victory in the Spanish Grand Prix, which enables him to cut Sebastian Vettel’s point’s lead to just six points at the one-quarter mark of the F1 season.  Vettel finished second.

Indianapolis-bound Fernando Alonso gave McLaren faithful some hope with his best qualifying run of the year, starting seventh in front of his hometown fans in Barcelona.  But he was forced off the track on the second corner of the race by Felipe Massa and dropped to tenth, finishing twelfth at the end and still looking for his first points of the season. But at least he finished, which he had not done in the first four races of the year. His twelfth place is the highest finish for either McLaren F1 car this season. The second McLaren car finished eighteenth at Spain.

After the race, Alonso caught an overnight flight to the United States. He’ll be at Indianapolis Monday afternoon for his first on-track experience with other cars around him.  He’s skipping the Monaco Grand Prix on the same day as the “500.”  The retired Jenson Button will take over his car for the event.