You are here: Home / Sports / Martinez does it all as Cards top Cubs 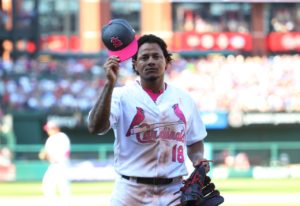 St. Louis Cardinals starting pitcher Carlos Martinez tips his cap as he comes out of the game in the eighth inning against the Chicago Cubs at Busch Stadium in St. Louis on May 13, 2017. St. Louis defeated Chicago 5-3. Photo by Bill Greenblatt/UPI

Cardinals starter Carlos Martinez had two hits and an RBI, and allowed three runs, five hits and four walks over 6 2/3 innings, while striking out seven as St. Louis beat the Chicago Cubs 5-3 on Saturday.

Martinez pushed Tommy Pham home on a squeeze bunt in the third inning. Cubs starter Jon Lester tried to field the ball and flip it home, but the ball rolled wide of home plate.  Lester gave the Cubs a 1-0 lead with a double in the second just missing a homer to deep center.

Seung Hwan Oh pitched the ninth, picking up his 10th save in 11 opportunities.