You are here: Home / News / Five Missouri elected officials who rolled up their sleeves this session—to fight

The 2017 Missouri Legislature’s regular session was relatively drama free until April rolled around. Then dysfunction unfolded in the state Senate through filibusters, attack ads and other heated verbal battles. The major players in this session’s Senate turmoil were mostly Republicans taking on fellow Republicans and two African-American Democrats from the St. Louis area.

Sen. Rob Schaaf and Governor Eric Greitens
It’s not every day that you see someone go up against a former Navy Seal and current governor to the extent that St. Joseph Sen. Rob Schaaf has dared to. Schaaf unflinchingly and repeatedly criticized Gov. Eric Greitens for refusing to reveal some campaign donations.

He called on Greitens to return a $1 million campaign contribution from megadonor David Humphreys. Schaaf said Greitens should stop calling senators “corrupt career politicians,” and instead should lead the state in stamping out corruption.

Schaaf stalled Senate business several times in recent weeks to show his opposition to certain legislation brought up on the floor, including a statewide expansion of managed care. Under the model, private companies are given a monthly fee to provide services to each of Missouri’s Medicaid recipients. During his series of filibusters, Schaaf ate up the clock by often talking about what he calls Greitens’ dark money tactics.

Part of Greitens’ agenda includes shaking things up with lawmakers who interfere with his priorities. In April, a political action committee formed to further Greitens’ agenda fired back at Schaaf by releasing negative ads implying that Schaaf is liberal and opposes legislation backed by the party. Schaaf criticized Greitens, claiming the ad – seen below – was misleading, and stated he was a strong proponent of banning lobbyist gifts and changes to campaign finance laws.

The PAC, A New Missouri, published Schaaf’s personal cell phone number in ads. Schaaf told Missourinet that he received thousands of voicemails. When his voicemail box filled up, the PAC encouraged people to text Schaaf. Later ads removed Schaaf’s cell phone number and replaced it with his office number. 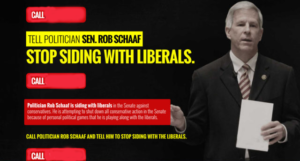 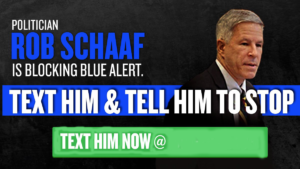 If anyone needs me in an emergency, please text as my voicemail is overwhelmed.

“Every single member of this body has to be able to have a free and fair discussion, not a discussion in which we are afraid of doing the right thing because we fear the governor running $30,000 worth of ads in our home district to stop us, to push us to do his work, his agenda, when it may not be ours. That is not OK,” Schaaf said on the Senate floor.

During an earlier Missourinet interview, the governor said he has nothing to do with the PAC’s day-to-day operations. Greitens told Missourinet that he disagreed with the organization’s move to release Schaaf’s personal cell phone number. The leader of the PAC, Austin Chambers, is also an advisor to the governor.

Senators spent several hours one evening this session debating a measure about a pay raise for state legislators and statewide elected officials. State senators and representatives would have received an $1,800 raise while statewide officeholders would have gotten an 8% pay increase in the next two years. Some Senators said legislators haven’t had a pay increase in several years. Other members said a pay hike wouldn’t be appropriate because of the state’s budget crisis.

Greitens apparently had enough and got involved. First, there was the tweeting.

Missourians are tightening their belts and living within their means. Politicians are trying to vote themselves raises. Typical, and awful.

Then came the face-to-face time. Media reports said Greitens camped out in Senate President Pro Tem Ron Richard’s office. He personally sought out Senators who favored a pay increase in hopes of changing their minds. The Missouri Times reported that Greitens belittled the lawmaker in person. Members of the upper chamber said the governor was trying to twist their arms and pressure them into voting against a pay raise.

Greitens’ tactics used that night rubbed some of his colleagues the wrong way. One criticism was that the attack ads against Schaaf crossed the line. Another is that his approach during the Senate’s debate was counter-productive. Sen. Jamilah Nasheed (D-St. Louis) said she did not condone his behavior but said he’s more hands-on than the previous governor.

When it was time to vote, the Senate rejected the pay increase. The move satisfied Greitens.

Great victory for taxpayers tonight – no pay increase for politicians! It’s time to focus on more jobs & higher pay for the people.

Senator Ryan Silvey
Another Republican that could be described as fearless this session was Sen. Ryan Silvey, R-Kansas City. He challenged the leader of the Senate, President Pro Tem Ron Richard, R-Joplin. Richard is viewed by colleagues as a “tough as nails” and “a man of few words.”

Their relationship grew cold after Richard chose Sen. Dan Brown, R-Rolla, instead of Silvey to chair the Senate Appropriations Committee, though Silvey is the vice chairman of the committee.

Silvey opposed mandatory union fees in the workplace, while Brown sponsored the successful anti-union Right-to-Work bill. Silvey’s position on the legislation might have cost him the top budget spot.

“It’s appalling to me that out of every university in this state, we are always being treated the worst,” Nasheed said with a raised voice.

After a closed-door meeting with several committee members, including Nasheed, a compromise was reached that placed $250,000 into Harris-Stowe.

Listen to Nasheed’s strong exchange during that hearing:

After a closed-door meeting with several committee members, including Nasheed, a compromise was reached that placed $250,000 into Harris-Stowe. Nasheed said for the first time in its history, another historically black college, Lincoln University, received $2.5 million in state funding.

Sen. Maria Chappelle-Nadal
On this final day of the 2017 legislative session, Missourinet added Sen. Maria Chappelle-Nadal, D-University City, for temporarily shutting Senate business down today. She was prepared to continue for several more hours. Chappelle-Nadal has fought tooth and nail with the EPA, state lawmakers and other officials to try and help the people of her district who have been impacted by radioactive waste near the West Lake Landfill and underground fire fumes from a nearby landfill.

This session, she originally proposed a $12.5 million buyout program for 91 homes near the West Lake Landfill. During the state’s current budget crisis, legislative budget leaders changed that figure to $1 million.

Chappelle-Nadal’s measure failed in the House today, prompting her to fight back. She announced that she would read on the Senate floor for the remainder of the session. Minutes later, the reading began and continued for about an hour. The bill that was up for debate was withdrawn, ending Chappelle-Nadal’s statement.

For years, West Lake Landfill area residents have complained about the health risks of the World War Two-era nuclear weapons waste and underground fire fumes from a nearby landfill. The U.S. Environmental Protection Agency, which oversees the radioactive material in the landfill, insists that the contamination does not pose a public health threat.

Since last year, Chappelle-Nadal has been very vocal in the legislature about the issue and will likely continue her fight for the foreseeable future.