The flooding spotlight is on St. Louis, where water levels on the Meramec River are expected to crest today.

Sandbagging efforts began to wind down yesterday afternoon in Eureka, west of the city, where heavy flooding’s expected.

Governor Eric Greitens was on hand Monday to lend support, while the National Guard came in force yesterday. 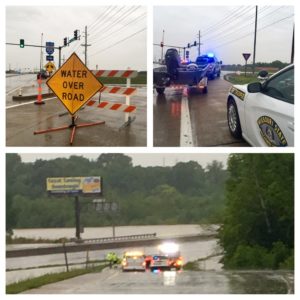 The good news is repairs to flood-damaged Interstate 44 further southwest at Hazelgreen in Laclede County are complete, and the highway is back open to traffic.

But MoDOT is still advising drivers to avoid I-44 when passing through the state because of its lengthy closure in the St. Louis area.  The agency suggests taking I-49 at Joplin north to Interstate 470 in Kansas City to connect to I-70 and then east to St. Louis.

Road closures continue in central and southern Missouri because of High water.  Route 50 at Mt. Sterling in Gasconade County and Route 63 at Vienna in Maries County are still under water.  Both roads are not expected to reopen until later this week.  Route 50 is also closed in Franklin County, while Route 47 in Warren County is expected to close.

Meanwhile, another round of rain is threatening areas which experienced record floods over the weekend.  Extreme south Missouri could see one-to-three inches, while the heaviest precipitation will be along and north of I-44 from west-central Missouri though Lake of the Ozarks, into St. Louis.

Mike Griffin with the National Weather Service in Springfield says rivers that previously flooded are once again at risk.

“We’re going to be watching very closely the Osage River system from Truman Lake into the Lake of the Ozarks system” said Griffin.  “We’re also going to watch the Gasconade, the Niangua, the Big Piney, those rivers could potentially have some additional problems as we go into tonight and early tomorrow morning.”

Most of the rivers and streams in the southern and central part of the state receded earlier this week, but could quickly return to flood levels.  Two-to-four inches of rain’s expected across an area along and north of I-44 from central-west Missouri through Lake of the Ozarks, and into St. Louis Wednesday and Wednesday night.

One-to-three inches are expected to fall in the southern part of the state, where the cities of West Plains and Neosho have already seen extensive damage from flooding.

The rain won’t be as intense as the storms that brought record flooding to some spots last weekend, but Meteorologist Gary Schmoker with the National Weather Service in St. Louis says more road closures are likely.

“If it hadn’t been for this additional rain, we would probably start to see slow improvement the over next few days, but with this additional rain it’s probably either status-quo or geting worse the next couple of days” said Schmoker.  “So there will probably likely be more areas that’ll get flooded, more roads that’ll be closed.”