Missouri’s federal levee system is performing well, despite flooding throughout the state. That’s according to Judd Kneuvean with the Kansas City district’s U.S. Army Corps of Engineers. 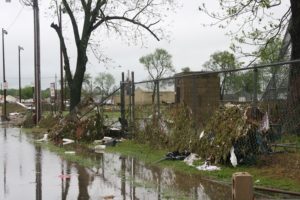 “We’ve seen a lot of high water here this past weekend on the Missouri River, particularly in the area from below Jefferson City down to the mouth near St. Louis,” says Kneuvean.

The district’s only federal levee is in eastern Missouri’s New Haven.

“We don’t expect any issues with it. Our federal levee system upstream at Jefferson City is also looking good. Overall, the levee system is in pretty good shape. The particular stretch of river has not had a significant amount of flooding on it since the 1993 flood event,” says Kneuvean.

He tells Missourinet most levees have been rebuilt since the Great Flood of 1993.

“The system seems to be much more reliable than it has in years past,” says Kneuvean. “When I talk about reliability, one of the things to remember is that levees don’t eliminate risk. They only reduce it.”

He says several areas have hit flood stage but have not exceeded flood stage since Saturday. Some minor issues have been reported by local levee systems.