Some of the major rivers in southern Missouri that set records for flood stage levels over the weekend are down as of Monday morning.

Flood waters reached the door of the Water Treatment Plant in Gelena and flooded the High School Park.

Overflows also reach the Liberty Bank Building and other businesses near the river as well as the post office.  The James River’s previous high water make was just under 36 feet in late March of 2008. 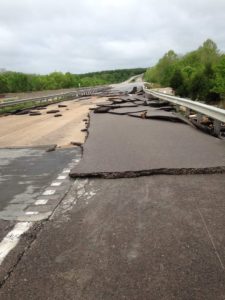 The Gasconade River, which has closed I-44 east of Lebanon, peaked at almost 39 feet Sunday.  It’s down slightly.  The Gasconade’s previous record was 34.9 feet in December of 2015.  Extensive pavement repairs will need to be performed at the I-44 bridge after it was overtaken by water. (See photo at left – courtesy of KOLR)

And the Sac River at Caplinger Millers is at 27.21 feet, down from its record of 31 feet over the weekend.

The National Weather Service in Springfield has extended the Flash Flood Warning for southwest Taney County until noon Tuesday, because of a large floodgate release at Table Rock Dam.

The death toll from flooding across Missouri is at three after a 78-year-old man in Jefferson County drowned Sunday afternoon when going out to check the rising water levels near his house.  His name has not yet been released.  18-year-old Gideon Jenkins of Richland in southern Missouri was killed early Sunday in Pulaski County.   And 72-yea-old Madelaine Krueger of Billings in southwest Missouri died whole her husband was rescued Saturday, after they were swept away by flood waters south of Clever.

The flood threat has concentrated in the southeast portion of the state and the southern part of the St. Louis metro area as of Monday afternoon.

Wayne County residents continue to see waters rise as rains from the north flow downstream. Sheriff Dean Finch says they executed a few rescues and are trying to get the word out to prevent the need for more.

“Yesterday, we did a couple of rescues” said Finch.  “Everyone is fine so far.  We haven’t had any problem getting people out who want to get out.  Yesterday we did put out a flyer, doing a volunteer evacuation in the Redwood Acres area.  It kind of got misconstrued as being mandatory, but it is not mandatory at this time.  It may become mandatory, but we’re hoping it doesn’t.  If you’ve got someplace to go, please go until we know exactly what this is going to do, because this is an historical event.   In Wayne county, it’s never been this high before.  They’ve never released this much water before.  Never had to.”

Finch says water is being released from area dams.  “Wappapello spillway, the overflow is already crossing the road.  Clearwater (Dam), they increased to 5,000 CFS (cubic feet per second) this morning…We’re sure exactly what it’s going to do.  The water is still rising.”

Highway 141 at I-44 in Valley Park in western suburban St. Louis closed late Sunday night because of high water.  MoDOT says I-44 at Highway 141 will close after the Monday evening rush hour and could remain shut down for the rest of the week.

The National Weather Service has issued flood warnings for the Joplin, Springfield, St. Louis and Columbia-Jefferson City areas.  All of them are set to expire at various time Tuesday, expect for Jefferson City, which is under a flood warning through Friday evening at 7 p.m.