(NASCAR)—Joey Logano went from last to first to pick up his first win of the year by beating teammate Brad Keselowski to the checkered flag at Richmond. Logano had to start from the back of the field because of a pre-race transmission change. He led the last seventeen laps.

The race was the 300th in Logano’s career in NASCAR’s top series.  He is the sixth driver in NASCAR’s sixty-year history to win his 300th start.

Matt Kenseth, who started on the pole and led the first 163 of the race’s 400 laps—the first laps he has led this year, ran into late-race problems and came home 23rd.

NASCAR moves from the short tracks to its longest and fastest track next weekend—Talladega Motor Speedway in Alabama.

(EDWARDS)—Columbia’s Carl Edwards remains NASCAR’s “man who isn’t there” as the season reaches the one-quarter mark. Fans, commentators, and even fellow drivers still don’t know what to make of his sudden announcement just before the season started that he was stepping away from driving this year. 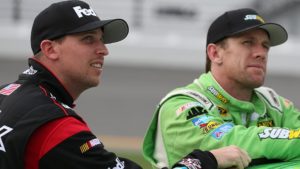 Former (for now, anyway) teammate Denny Hamlin at Joe Gibbs Racing was asked at Richmond this weekend if he thinks Edwards is done.   Hamlin, who called Edwards “a competitor,” thinks there’s a fifty percent chance Edwards will be back in a race car.  “At his age, I find it hard to believe that he would just step away and not even do it again,” he said.  Hamlin’s entire comment is at http://www.nascar.com/en_us/news-media/franchises/press-pass.denny-hamlin-on-possible-carl-edwards-return.5415382905001.html.

Dale Earnhardt Jr.’s announcement last week that this will be his last year in the Cup series immediately fueled speculation Edwards would join Hendrick Motorsports as Earnhardt’s replacement in 2018. 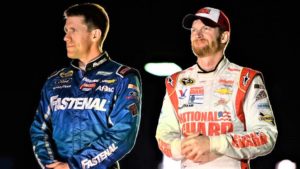 “Not going to happen,” says FoxSports.com’s Tom Jensen, who says “multiple sources” from both Hendrick and Edwards camps say Edwards and Hendrick representatives have had no discussions and have no plans for talks.

Pagenaud led Penske teammate Will Power across the line by about nine seconds at the Phoenix mile oval Saturday night. His nine previous IndyCar wins have been on road courses.  The win puts Pagenaud in the points lead after the fourth of seventeen races on the series schedule.  He and Scott Dixon, who came home fifth, are the only drivers in the series to finish in the top five in all four races.  The victory was also a milestone for Penske racing: the 450th win in all forms of motorsports (Logano’s win at Richmond upped the number to 451), and Penske’s 100th IndyCar win on an oval.

J. R. Hildebrand finished third, his first podium finish since his near-victory in the 2011 Indianapolis 500 when he crashed on the last turn of the last lap and was overtaken by Dan Wheldon in the last few yards before the finish line.  Hildebrand was racing with a broken hand.  He suffered the break on the last lap of the Grand Prix of Long Beach when his car rear-ended the car of Mikhail Aleshin and the steering wheel was torn from his hand.

Now it’s on to Indianapolis for the month of May.  The fourth Grand Prix of Indianapolis will be run Saturday, May 13 on the Speedway’s road course.  About two weeks later, Sunday, May 28, the green flag will drop on the 101st running of the Indianapolis 500.

(FORMULA 1)—Mercedes’ new driver, Valtterri Bottas, has notched his first Formula 1 win, holding off four-time F1 champion Sebastian Vettel to capture the Grand Prix of Russia. Vettel cut Bottas’ lead to less than one second with a couple of laps left, but Bottas regained some ground when he lapped backmarkers and Vettel had a little trouble getting around the same cars.

The win comes in Bottas’ 82nd Formula One race. It is only the fifth podium finish in his five-year F1 career.

Vettel had started on the pole, next to Kimi Raikkonen, but Bottas got past both of them on the green flag and held the lead throughout.  His teammate, Lewis Hamilton, struggled all day and came home fourth.

Vettel leads Hamilton in the points by thirteen and is twenty-three up on Bottas.

Fernando Alonso, already mired in so miserable a season that he is going to skip Monaco in May to run at Indianapolis, didn’t even get to the green flag on the Sochi Circuit.  He retired on the pace lap with a mechanical problem and could not even get his McLaren back to the team garage.  Alonso, a two-time F1 champion, has retired from all four races this year.

Alonso left after the race for an overnight flight to the United States. He’ll turn his first laps in an IndyCar Wednesday at the Indianapolis Motor Speedway. Although is car will be sponsored by McLaren, it will be the standard IndyCar Dallara chassis.

The next Formula 1 race will be the Spanish Grand Prix, May 14.  The Spanish GP is usually the first race of the season when teams put their updated cars in a race for the first time. McLaren has not officially announced Alonso’s replacement for Monaco although speculation is that retired former champion Jenson Button will be the man.  He’s under contract with McLaren as a reserve driver.  Button, the 2009 F1 champion, retired at the end of last year but his McLaren contract says he will replace any driver unable to run a grand prix this year.