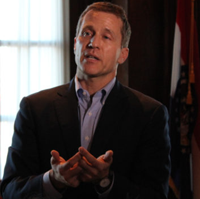 Governor Eric Greitens (R) says he disagrees with a political action committee releasing Sen. Rob Schaaf’s (R-St. Joseph) personal cell phone number, but he says he’s not involved in its day-to-day operations. The PAC – A New Missouri – was created to support Greitens’ agenda. It has released attack ads last week against Schaaf urging constituents to tell him to “stop siding with liberals” and blocking certain legislation.

“People are sick of watching career politicians talk and talk and talk but not getting anything done,” says Greitens. “People are standing up. They’re joining us and making sure that we get our priorities passed.”

Schaaf has taken aim this session at Greitens by calling out the governor about refusing to release some campaign donation information, or so-called dark money. 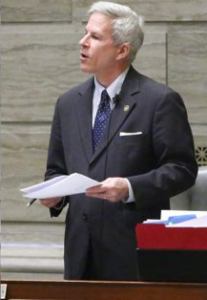 Schaaf told a publication that the governor lacks the courage to confront him directly. During an Missourinet interview in Greitens’ Capitol office, he says that’s not the case.

“We’ll have a conversation who’s willing to fight for the people of Missouri,” says Greitens. “But when you have really liberal, anti-law enforcement politicians who get up and do things like filibuster something like Blue Alert, which I think makes sense to everybody. People around the state know that we need to support our law enforcement officers.”

Schaaf successfully halted Senate business in the chamber most of last week through filibusters focused on his opposition to expanding managed care statewide. Under managed care, private companies are given a monthly fee to provide services to each of Missouri’s Medicaid recipients.

The House and Senate have both passed the expansion.