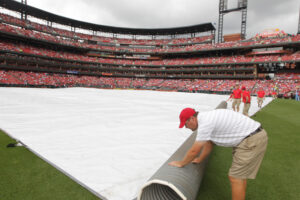 The St. Louis Cardinals announced that their game against the Toronto Blue Jays scheduled for 7:15 p.m. tonight has been postponed due to the continuous rain forecasted throughout the afternoon and night.

The two teams will make up tonight’s scheduled game tomorrow evening at 6:15 p.m. as part of a day/night split double-header.  Fans holding tickets to tonight’s game should use those same tickets for admittance to tomorrow’s 6:15 p.m. make-up game.