(NASCAR)—Rain washed out NASCAR’s race at Bristol Sunday. Officials are hoping for clear skies at noon Monday for the drop of the green flag. 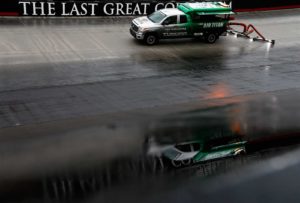 Rain washed out qualifying so points leader Kyle Larson will start from the pole with Chase Elliott on the outside.  It’s a 500-lapper on the .533 mile track that has been hosting NASCAR races since 1961.

Matt Kenseth has run more races at Bristol than any active driver—34 of them (Richard Petty holds the record with 60).  This will be the 31st start at Bristol for Ryan Newman. No active driver has started more races there without getting a win.  Columbia’s Carl Edwards won the spring race there last year.

Kenseth’s future is a matter of some speculation.  He’s 45, which some view as getting a little long in the tooth in an intensely competitive sport that has an increasing number of 20-somethings challenging the veterans. Some internet buzz during the off-week last weekend speculated that his time with Joe Gibbs Racing is running out. But Kenseth says with a straight face that he might race another fifteen or twenty years.  He told the internet site Jayski.com, “If Tom Brady can play football at 50 and still win Super Bowls, I think 45 is pretty young to try to win races.”  Joe Gibbs says having Kenseth in the 20-car in 2018 is “certainly what we hope. That’s what we’re working toward.”

But the early Silly Season buzz will keep buzzing.  Some participants like to think Carl Edwards will be back in the fire suit and helmet next year, and will be in the 20.  Edwards has been living a quiet, low-visibility existence for the most part since announcing in January that he was taking the year off and has shown no inclination to take part in the discussion.

(IndyCar)—Will Power had the field covered at the Grand Prix of Alabama until one of his rear tires developed a leak.  His late pit stop let new Penske teammate Josef Newgarden pick up his first victory for the team, the fourth IndyCar win of his career.   Power, who led sixty of the race’s ninety laps, stayed on the lead lap but dropped to fourteenth at the checkered flag.

IndyCar will be at Phoenix for a Saturday night race next weekend, the first race of the year on an oval, before heading to Indianapolis for a race May 13 on the Speedway’s road course.  The 101st running of the Indianapolis 500 is on the 28th.

McLaren will sponsor the Andretti Autosport car at Indianapolis and Brown says Alonso’s run this year might not be a one-off event. “I would like to see McLaren-Honda competing at Indianapolis every year,” he said at Alabama.

Autosport  writer David Malsher reports Brown is realistic about his Formula 1 team’s poor performance this year. “Given the circumstances of how we are running in Formula 1 right now, and Fernando’s desire and our desire, and Honda’s desire, this created a very small window of opportunity that we jumped on…I’d like to see McLaren here on a more regular basis.” 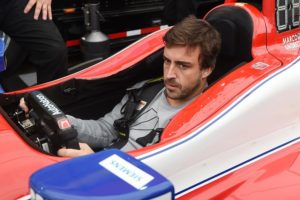 Alonso tried on Marco Andretti’s car this weekend at Alabama although he hasn’t turned any laps at speed. He’ll get his first test laps at Indianapolis on May 3. Andretti will be Alonso’s strategist during the race.  Brown says 2003 “500” winner Gil de Ferran has been hired to coach Alonso as he learns the nuances of high-speed oval racing.

Although Brown is already thinking of a continued presence at Indianapolis for McLaren, Alonso is more cautious.  He says he’s “open” to running the race again but he wants to see on May 29, the day after the race how much he enjoyed the race and how competitive he felt. Most of all, he wants to know if he had fun, “the priority for me,” he said.

McLaren will run at Indianapolis as a sponsor.  In the 1970s, before IndyCar required all teams to run a common chassis, McLaren-made automobiles, running 1970-70, posted victories in 1972 with Mark Donohue in a Penske-owned McLaren, and wins with their own cars in 1974 and 1976, both times with Johnny Rutherford.  McLarens sat on the pole for the 500 with Peter Revson in ’71 and with Rutherford in ’73.

Formula 1 races next weekend in the Grand Prix of Russia, which is run at the Black Sea resort of Sochi.

Previous Post: « Wainwright does it with both the arm and bat to lead Cardinals to victory
Next Post: Missouri Senate turmoil could cause critical measures to die this session »