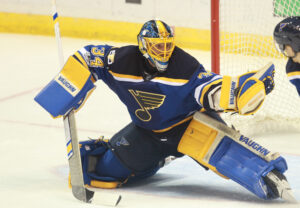 The chants for Jake Allen were deafening.

It’s been that kind of run for the St. Louis Blues goaltender.

For the third time in as many games, Allen was the difference-maker, with 40 saves in a 3-1 win against the Minnesota Wild in Game 3 of the Western Conference First Round at Scottrade Center on Sunday.

Allen has stopped 114 of 117 shots in three games against Minnesota and has a 0.91 goals-against average and .974 save percentage. On multiple occasions chants of ‘Al-len!, Al-len!, Al-len!’ resonated from the 19,334 in attendance.

Alexander Steen had a goal and an assist, and Colton Parayko and Jaden Schwartz scored for the Blues.

Charlie Coyle scored and Devan Dubnyk made 28 saves for the Wild, who were held to one goal for the third straight game.