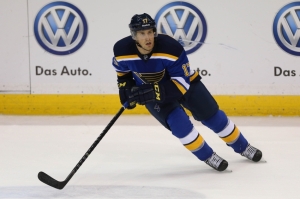 Jaden Schwartz scored with 2:27 left in the third period to give the St. Louis Blues a 2-1 win against the Minnesota Wild in Game 2 of the Western Conference First Round at Xcel Energy Center on Friday.

The Blues, who took a 2-0 lead in the best-of-7 series with their second 2-1 road win, host Game 3 at Scottrade Center on Sunday.

Joel Edmundson, who scored the overtime winner for St. Louis on Wednesday, scored at 3:51 of the second period to give the Blues a 1-0 lead. The defenseman had three goals in 69 games during the regular season and scored in consecutive games for the first time in his two NHL seasons.