State Reps. Tracy McCreery (D-St. Louis) and Donna Lichtenegger (R-Cape Girardeau) want to keep guns out of the hands of those found guilty of domestic violence. A Missouri House committee could vote next week on Lichtenegger’s bill that would close a loophole in state law created by the legislature’s 2015 passage of comprehensive gun legislation, Senate bill 656. Last year, the General Assembly passed the sweeping changes with an agreement that lawmakers would return this year and close that gap in the law. 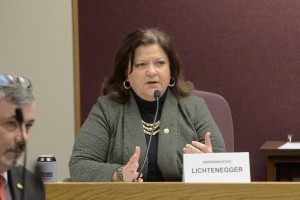 Lichtenegger says she’s the perfect person to sponsor the measure because she understands both sides of the argument.

“This is a very hard bill for me to do. My mother and I have both been domestically abused by my father,” says Lichtenegger. “Just the whole thing with my belief in people owning their guns and being able to have their guns. I take that as a sacred right of this country. We know that we need to fix what was left undone for our police departments to help victims when they have been domestically abused. Not just wives, husbands, spouses and partners, but people who are dating.”

Lichtenegger’s bill includes a 24-hour period in which abusers have to transfer ownership of their guns.

“I know that we need a transfer period. Otherwise, the person is committing two federal crimes,” says Lichtenegger. “I just happen to think that 24 hours is too long. That’s probably the most dangerous time for somebody that has been domestically abused.”

Lichtenegger withdrew a similar measure and filed the one under consideration. She says the previous bill wasn’t properly written and had several problems with it.

Both Lichtenegger’s and McCreery’s bills bar those found guilty of misdemeanor domestic violence. 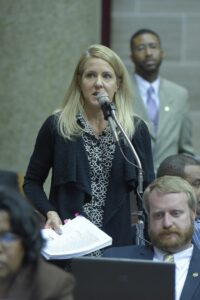 “It saddens me and frightens me. I’m a gun owner myself but I just feel like I’m more of a common sense gun owner,” says McCreery. “I think that the vast majority of Missourians think that we should do everything we can to protect victims of violence and their children. Having guns in the hands of someone convicted of domestic abuse is deadly.”

“The federal definition of intimate partners does not include dating partners but the Missouri definition does include dating partners. I think that’s an important distinction because violence can happen even with people that are just in an early stage of a relationship,” says McCreery. “It’s not like an abuser waits until you are married or until you have moved into an apartment or house together.”

It also extends protections to the children of victims.

“One of the things we see in controlling relationships is, you can use children or sometimes, for that matter, even animals or pets, as a way to kind of get the victim that’s under your control to do things or not do things as well,” says McCreery.

McCreery says her proposal is similar to federal law. She also hopes the measure will please her Republican counterparts. It includes prohibiting gun ownership to those who have been dishonorably discharged from the military, are not a U.S. citizen or renounced U.S. citizenship.

McCreery’s bill has not been assigned to a committee at this point.