A bill in the state legislature would let Jefferson City attempt to turn the historic Missouri State Penitentiary within its borders into a tourism bonanza. 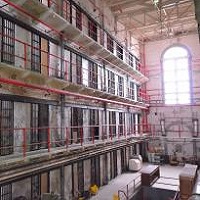 The proposal from Rep. Mike Bernskoetter (R-Jefferson City) would simply allow the governor to transfer ownership of 30 acres out the facility’s 128 acres to the city, which would then use the property to develop attractions.

Jefferson City Mayor Carrie Tergin testified before a House committee that’s examining the measure.  She noted tours at the penitentiary rose from 3,000 in 2009 to more than 33,000 in 2016, and says the city has three elements no other place has.

“We have a state capitol, a river and an historic prison” said Tergin.  “And we’re the only city in the country that has those three things.  So we feel very certain that we can reach these numbers if we’re aloud to move forward with development.”

Eastern State has 350,000 tours per year while Alcatraz has 1.3 million.  Tergin pointed out during the hearing that the Missouri State Penitentiary is 100 years older than Alcatraz.

She also noted there’s frustration over money lost in the 13 years the site hasn’t seen development.  “One reason we’ve heard, of course, is the state has the budget issues, and it’s been something that just hasn’t been a priority to put the development into the sight.  So the city is saying ‘We are happy to facilitate that development and partner with the state’.”

According to Tergin, the city would follow the state’s two-year old master plan to develop the prison with hotels, entertainment venues, dining, retail, housing, loft apartments and office space.

A couple of organizations have set up offices at the facility over the past 12 years.  The Lewis & Clark state office building was occupied in 2005.  In 2006, the Missouri State Health Lab opened at the site.

Diane Gillespie with the Jefferson City Convention and Visitors Bureau, which oversees tours at the prison, also spoke in front of the committee.  She said all profits are reinvested in the space.

“Under the use agreement, any net profits that are made off the tours, go back into the preservation of (the penitentiary)” said Gillespie.  “For example, last year we were able to put in $100,000 toward improvements.  So that is just preserving that building.  And we will continue to do that.”

The facility offers a variety of two and three-hour tours as well as five and eight-hour “public overnight investigations”.  It’s also offering a special tour during this summer’s total eclipse.

The city’s plan to finance the 30 acres it’s asking for includes joining Cole County on a $2 million sales-tax partnership to build a road into the site, and using $13 million in lodging tax funds to construct a meeting space.

The House bill sponsored by Rep. Bernskoetter will have a  tough time pushing through the legislature, given the body’s pace moving legislation and the fact there’s only four weeks left in the current session.  However, two measures from Senator Mike Kehoe (R-Jefferson City) have passed through the upper chamber and are now in the House.  One of them could hi the House floor at any time.