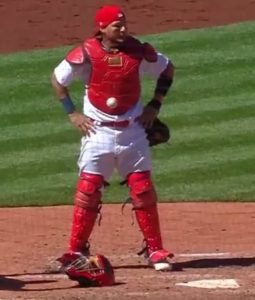 In one of the strangest plays you will ever see in baseball, new Cardinals lefty pitcher Brett Cecil and his battery mate Yadier Molina found themselves in a sticky situation during Thursday afternoon’s game against the Chicago Cubs.

Cecil made his Cardinals debut and struck out the first batter he faced, Matt Szczur on a ball in the dirt. Szczur took off for first on the “dropped third strike” rule but there was a problem…the ball never really dropped. As Molina flipped off his mask and was hastily looking for the ball, Szczur made it to first base before Molina realized the ball was stuck to the front of his chest protector.

Molina laughed it off, but things turned serious as Cecil walked former Cardinal Jon Jay and then gave up a three-run homer to Kyle Schwarber as the Cubs jumped in front 5-4. Cecil then walked Kris Bryant and allowed a single to Anthony Rizzo before being pulled with an ERA that is registered as infinity.

Chicago added another run and won the game 6-4.

Watch the replay below.