The Missouri House is set to formally pass a budget for the next fiscal year Thursday.  GOP Governor Eric Greitens has proposed $572 million in cuts to the $9.4 billion general revenue fund the legislature oversees. 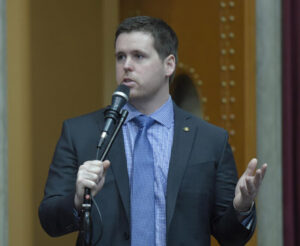 As far as synching up with the Senate, there’s at least one bone of contention which will require some negotiations.  The House fully funded the K-12 foundation formula.

Fitzpatrick notes his counterpart in the Senate, Appropriations Committee Chairman Dan Brown (R-Rolla) has expressed concern over the move.

“If we fully fund the formula, then the next year when the formula equation is figured, the school districts can request funding for early childhood as a part of that.  Now it’s still subject to appropriations.  We can either appropriate it or not, but the Senate is concerned about that.”

A 2014 law allows districts which operate early childhood programs to receive state funding through the foundation formula in the school year after the formula is fully funded.  The Senate has indicated it won’t agree to fully fund the formula.   Governor Greitens has allocated less money than the House has for education.

The Chamber’s budget set to be finalized also includes language which actually denies funding for a number of programs.  Fitzpatrick says one of them, drunk driving check-points, was stripped of all but one dollar because another tactic, saturation patrols, is more effective.

“Check points are becoming avoidable.  There’s literally apps now that’ll tell people if there’s a check point anywhere.  So they just drive around them.  Saturation patrols get more people off the road.  They cost less money per arrest.”

Other programs stripped of funding in the House budget are toll roads and in-state tuition for undocumented immigrants.

Fitzpatrick noted the toll roads provision passed on a voice vote.  He objected to a Democratic amendment to the in-state tuition language, which he claims would unfairly allow undocumented immigrants to pay lower college tuition than legal immigrants.

Fitzpatrick is confident a state budget will be finalized by the May 5th deadline.  The overall budget cuts are a reflection of ongoing shortfalls in tax collections.

Fitzpatrick is happy with his chamber’s work.  “The House has done its job.”

Previous Post: « Mizzou to lay off 20 employees; university cites a decline in state funding and an enrollment drop
Next Post: Missourinet 7 a.m. News 4-6-2017 »